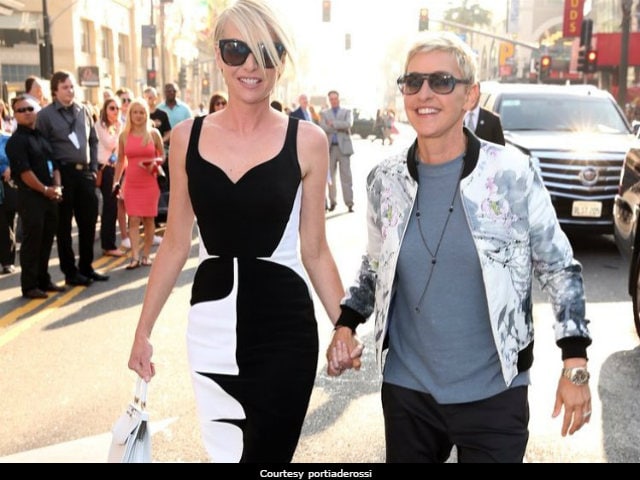 New Delhi: Celebrity couple Ellen DeGeneres and Portia De Rossi have been rumoured to be on the brink of divorce for months now, with tabloids gossiping about alleged infidelity and a fondness for the bottle on Ellen's part. The latest story doing the rounds - that Portia, 44, slit her wrists over her allegedly strained relationship with Ellen - has been debunked by Gossip Cop, which quotes a 'reliable source' as saying "It's made-up nonsense." Gossip Cop has also dismissed other rumours about the couple, including that Ellen was in rehab for her alleged drinking and that she and Portia, who have been married over eight years, are now living separately.

The self-harming story was reported by the tabloid National Enquirer, which also claimed that Portia is "resisting help." National Enquirer quotes its own source as saying, "Ellen can't deal when Portia gets attached to anyone else, man or woman. But it works both ways. When Ellen kisses up to her famous friends... Portia becomes consumed with self-doubt." The story appears to have been now removed.

Promoted
Listen to the latest songs, only on JioSaavn.com
There's no indication of trouble on Ellen DeGeneres' Twitter - her most recent post was this:

If anybody can tell me something cuter than this, I'm all ears. pic.twitter.com/gYuEse04bf

Talk show host Ellen DeGeneres, 59, and Portia De Rossi married in 2008. Apart from hosting her self-titled show, Ellen is known for voicing Dory in the films Finding Nemo and Finding Dory, and for hosting award shows such as the Oscars and the Grammys. Portia, who is Australian, is best known for her work on the TV shows Ally McBeal, Arrested Development and Nip/Tuck.