Newlywed Pooja Batra shared her mantra to de-stress with her Instafam. 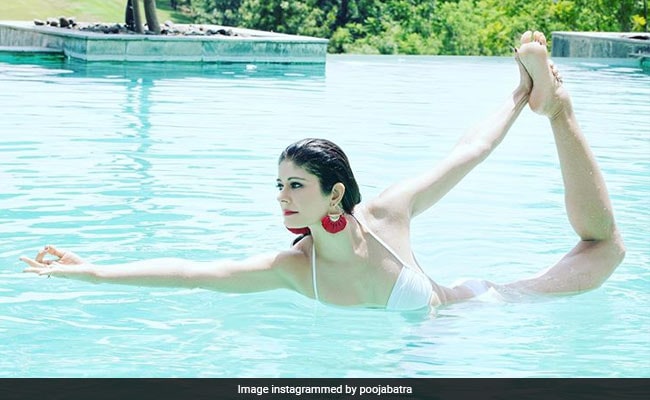 Virasat actress Pooja Batra was spotted on the list of trends all of July after reports of her hush-hush wedding to actor Nawab Shah spread like wildfire on social media. After confirming her wedding to Nawab Shah, Pooja Batra is back to the usual flow of things, which include fitness and yoga. The 42-year-old actress shared a picture from her recent aqua yoga session and quoted BKS Iyengar, founder of the Iyengar style of yoga, to motivate her Instafam. "'Yoga does not change the way we see things. It transforms the person who sees.' - BKS Iyengar. One of the many important benefits yoga offers is that it can help us reset an overworked nervous system stuck in a stress-induced fight-or-flight mode," Pooja captioned the post.

Pooja Batra's post was flooded with compliments and a heart emoticon from Nawab Shah. "No words to define her beauty... she is just fire in water," wrote a smitten fan. Another Instagram user added, "Amazing... Incredible... Unimaginable."

"Yoga does not change the way we see things. It transforms the person who sees." B.K.S. Iyengar One of the many important benefits yoga offers is that it can help us reset an overworked nervous system stuck in a stress-induced fight-or-flight mode.

Earlier this month, Pooja Batra and Nawab Shah opted for an Arya Samaj wedding in Delhi. The reports of their wedding were out after Pooja Batra was spotted wearing a traditional bridal choora and soon she told Bombay Times, "I was simply going with the flow, but then I realised that he is the man I want to spend the rest of my life with, and there is no point in delaying it any further. So, here we are."

Pooja Batra also shared a picture from her wedding day, in which she can be seen dressed in a green-blue saree with a contrast pink dupatta for the ceremony. "We did," she captioned the post.

Pooja Batra is best known for her roles in films such as Virasat, Kahin Pyaar Na Ho Jaaye, Jodi No 1 and Nayak. Nawab Shah has featured in small roles in movies like Musafir, Lakshya, Don 2 and Dilwale.