We can't get enough of this stunning picture 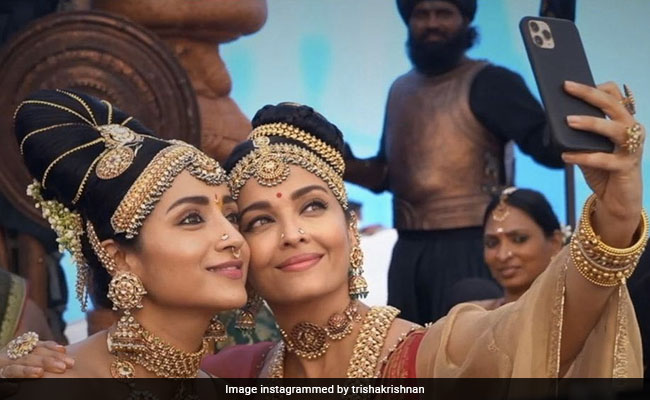 It is not everyday that we get to see stars like Aishwarya Rai Bachchan and Trisha in a single frame. So when we chanced upon this picture, we can't help but love it. On Friday, Trisha shared the kind of picture that could break the Internet - a selfie of her and co-star Aishwarya Rai Bachchan from the sets of Mani Ratnam's Ponniyin Selvan. It can't get better that this. Can it? "Ash," she simply captioned the post, adding a heart emoji. Trisha, during an interview with NDTV, shared her experience of working with the actress and said: "Aish Ma'am, I fortunately got to meet her and interact with her on the day one of my shoot. She is beautiful inside and out, I don't even need to say that. The thing is, this was challenging because we are not supposed to like each other too much in this film, but we got along pretty famously on set."

Earlier this month, Trisha attended the grand trailer and music launch of Ponniyin Selvan. She shared moments from the event. In one of the pictures, she could be seen hugging Aishwarya. In another frame, the two stars could be seen sharing the stage.

ICYMI, take a look at the video here:

Ponniyin Selvan, produced by Lyca Productions, the first part of magnum opus Ponniyin Selvan, will hit the theatres on September 30 this year in five languages - Tamil, Hindi, Telugu, Malayalam and Kannada. It will clash with Vikram Vedha, starring Hrithik Roshan and Saif Ali Khan at the box office.