Pics: What Preity Zinta Is Doing On Her Family Holiday In South Africa 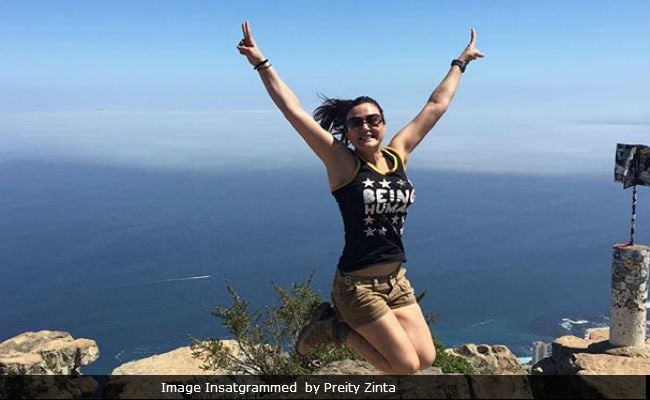 New Delhi: Actress Preity Zinta is currently making South Africa look a lot more fabulous. She is in the African continent, for her family-only vacation with her husband Gene Goodenough, mother Nilprabha and the in laws. Preity has all sorts of adventures on her vacation itinerary and is checking them off one by one. She has already bumped into three cheetahs during a walk, had an amazing experience of the jungle safari and has conquered the Lion's Head mountains around the beautiful Cape Town city, which are 669 meter above the sea level - we know all of this because she's filled up her social media with post-card like entries from South Africa.

Preity Zinta appears visibly excited to have been part of so many adventures at once (along with her family) - her captions are proof of how thrilled she's been with each experience. " The start, the middle and the end of it all #lionshead #mountainchallenge #capetown #Woohoo #Familyholiday" she wrote for her picture from Lion's Head mountains while another one said: " The need to go a little higher after reaching the top of the mountain is motivation for this photo."

The start, the middle & the end of it all #lionshead #mountainchallenge #capetown #Woohoo#Familyholiday

Preity loves every bit of her African Safari. "A big thank you to this incredible lot for giving us the experience of a lifetime in the bush," is what she wrote for a post.

Preity has not made any big screen appearances for a long time. She was last seen in 2013's Ishkq In Paris. Preity and Gene married in Los Angeles in February last year.
Comments
Preity Zintapreity zinta south africaFamily vacation