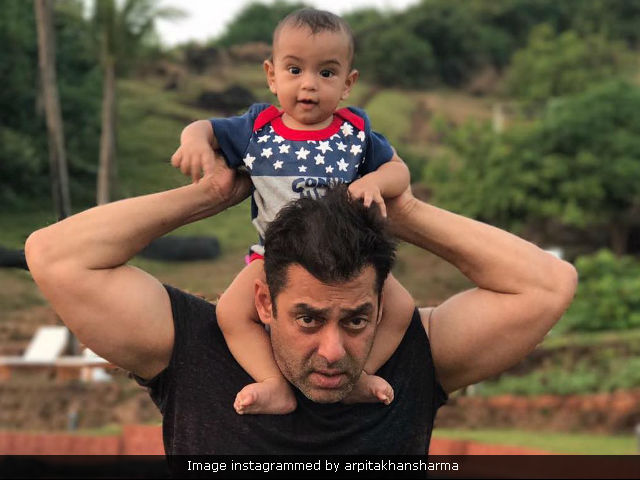 New Delhi: Actor Salman Khan is chilling with his nephew Ahil and Salman's sister Arpita Khan Sharma shared "priceless moments" from their play date on Instagram. Salman Khan is happy "being mama" to baby Ahil, who seems to be loving all the attention the 51-year-old superstar is giving him. In the pictures, Ahil is nibbling his finger as Salman Khan, lying on his back, raised him. In another picture, Ahil decided tocover Salman's face with his two hands. In one word the two pictures can be summed up as "adorable." Salman Khan recently wrapped the shooting of his film Tubelight and has now turned his attention to his family.

Salman Khan kreally dotes on Ahil, who was allowed to chew on his lucky bracelet too. Ahil often accompanies Salman to his outdoor shoots with his parents and recently he also dropped in on the sets of television show Bigg Boss 10, which was hosted by Salman.

Here are some more pictures of Ahil and Salman Khan:

Promoted
Listen to the latest songs, only on JioSaavn.com
Tubelight, directed by Kabir Khan also stars Chinese actress Zhu Zhu and has Shah Rukh Khan in a special appearance. Salman has also signed up for Tiger Zinda Hai (a sequel to Ek Tha Tiger) with Katrina Kaif. The film reunites Salman with his Sultan director Ali Abbas Zafar.

Salman Khan will keep his Eid date with Tubelight this year.