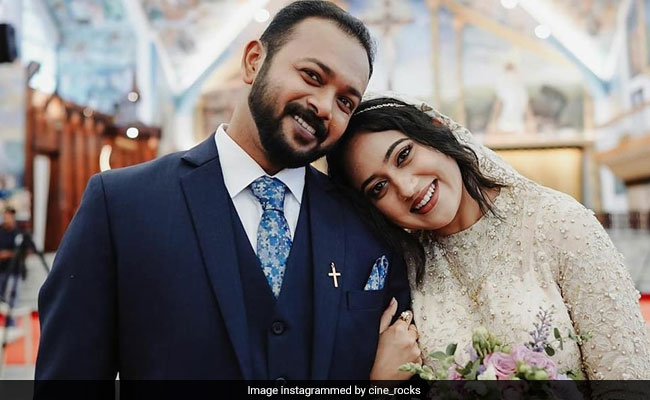 Malayalam actress Miya George and her fiancé, businessman Ashwin Philip, got married in a close-knit ceremony in Kochi on Saturday. The duo have been trending incessantly on social media after pictures from their dreamy wedding surfaced on the Internet. In the photos, Miya looks stunning in an off-white, high-neck sequined gown while Ashwin looks dashing in a blue three-piece suit. Beautiful pictures from Miya and Ashwin's wedding have been shared by several fan-pages, as well as by the photographer, who covered the ceremony. Miya and Ashwin announced their engagement in June. However, the official betrothal ceremony took place last month (more on that later).

In June, Miya George shared a happy photo of herself and Ashwin and made it official like this: "Thanks for all the love and prayers." Two months later, the actress posted breathtaking pictures from her "dream betrothal" that was held in Pala, Kerala.

A couple of days ago, Miya George gave her fans a sneak peek into her bridal shower.

Miya George is known for her performances in films like Red Wine, Memories, Vishudhan and Mr. Fraud. She made her debut in the Tamil film industry with the 2014 romantic drama Amara Kaviyam. Before starting her career in films, Miya George also worked in some television shows such as Kunjali Marakkar and Alphonsamma.

Miya's upcoming project is a Tamil film titled Cobra, in which she will share screen space with Vikram. Directed by R Ajay Gnanamuthu, the film will also feature Srinidhi Shetty and Irfan Pathan.