The video is directly addressed to the Indian TV czarina, in which PewDiePie mockingly misspells her name and refers to her like this: "Etika Kapoor" 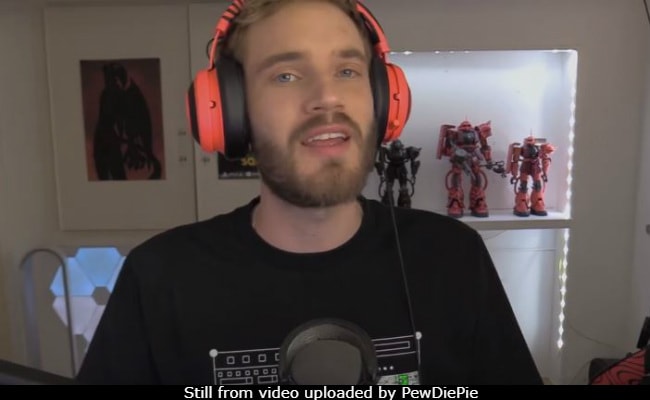 PewDiePie in a still from his new video (courtesy YouTube)

New Delhi: PewDiePie, the most followed YouTuber, has something to tell Ekta Kapoor. Again. The Swedish YouTuber, who's original name is Felix Arvid Ulf Kjellberg, recently uploaded a video on his YouTube channel and titled it: "She's angry because I made fun of her." The video is directly addressed to the Indian TV czarina, in which the YouTuber mockingly misspells Ekta Kapoor's name and refers to her like this: "Etika Kapoor here and I hate PewDiePie." As he says this, a banner featuring "Etika Kapoor" briefly flashes on the screen. Hofwever, PewDiePie appears to be well aware of correct version of Ekta's name as later in the video, he pronounces her name as 'Ekta Kapoor'. PewDiePie, who previously brutally mocked the Ekta Kapoor-produced Kasamh Se and found mention in angry tweets by Ekta Kapoor, attempted to put out his version of what ticked Ekta Kapoor off. "What did I do to trigger this woman?" he asked and added: "She went on a big Twitter rant because I said 'good quality'."

We'll give you a little context here. Last month PewDiePie, tweeted a pixelated still from Kasamh Se and added a sarcasm-laden caption to it: "(good quality)", he wrote and went on to make a spoof video of the TV soap, in which he slammed Ekta Kapoor's show for being dramatic and going overboard with visual edits. Ekta was quick to spot the video and dismissed PewDiePie as someone who looks like "junior artists we hire from Colaba when we create Paris."

In the new video, PewDiePie said posting a screenshot had "nothing to do with" Ekta Kapoor in particular. "I don't know who you are. What do you want from me?" he also said before pointing out that: "The people defending her is very scarce." PewDiePie's claim appears to be true because the comments section on his YouTube feed are filled with remarks like these: "Not being rude but Etka Kapoor cannot take a joke. Not being rude" and "Your sarcasm is so tight that she can't handle." Even last month, a section of the Internet had attacked Ekta for her apparent "racial slur" against PewDiePie, whose subscriber count on YouTube has increased by 10 million since then and reads 63,089,814 as we speak.

Following the brutal criticism of Ekta Kapoor, PewDiePie also ventured on an uncalled for rant about the "extreme savagery of the Indians" and wrapped his video with this disclaimer: "Don't be like Ekta Kapoor and go on a Twitter rant when it is completely unrelated to you as well." PewDiePie has featured in headlines before for appearing to be rather "racist" in his approach. Last year, he apologised after hurling out racial abuses while live-streaming a video game. Earlier, both YouTube and Disney had withdrawn their contracts with the YouTube over his anti-Semitic approach. The year before, Twitter had blocked him after he jokingly claimed he's joined ISIS.


Promoted
Listen to the latest songs, only on JioSaavn.com
There's not been any response from Ekta Kapoor after PewDiePie uploaded the new video but this is how Ekta had reacted last month:

Bhai tu kaun hai! Luks like d firang junior artists we hire from colaba when we Create Paris in arey:) he will find his dopplegangers in kasam se only;) https://t.co/miESFOiFrO

Just opened my Twitter n realised I finally arrived :) this hate welcome has put me in August company :)/):)! Just one thing if anyone is waiting for me to apologise to peudy something it's NOT happening :)

And irreverence that he adopted to pan everything in India's popular culture ! So all those getting highly protective about his power n millions ( some even claimed wat I was ' worth') remember his video which we pass as sarcastic n ' humourous' was titled ' india u lose'

P.s I seriously dint know who he is ;):):) like he doesn't know any tv personality or rajnikant! Heehaw !!!! Much love haters I'm back to making videos n fodder for this youtubers next feed

Will Ekta Kapoor have anything to say about PewDiePie's new video any time soon? What do you think? Tell us in the comments below.