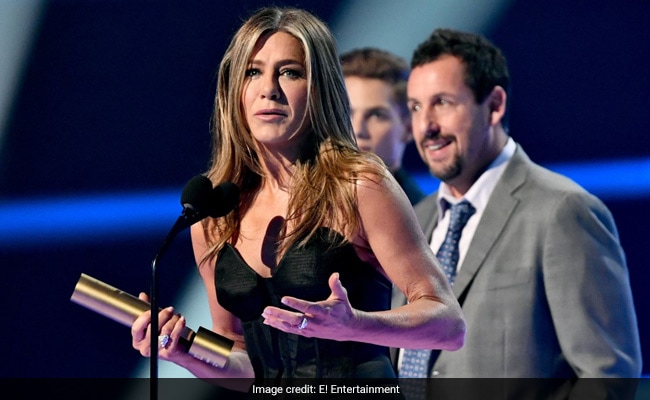 Sunday night's show was no exception, though a number of celebrities had surprisingly funny and/or poignant speeches. Here were some of the most noteworthy quotes from the two-hour telecast. (The list of winners and nominees is below.)

Hart made his first big public appearance since he was seriously injured in a car accident in September, as he accepted the comedy act award. The actor walked out from backstage to a standing ovation from the audience.

"First and foremost, thank God, because I definitely don't have to be here. Being that I am, it makes me appreciate life even more, it makes me appreciate the things that really matter," said Hart, who also thanked his wife and kids. He turned his attention to the fans: "You have no idea the effect you have on us as entertainers. Your energy, your support, it means the world. And I truly want to thank you guys for being there for me and my difficult time."

World Cup champion Alex Morgan introduced Pink, who won the 2019 People's Champion honor, and explained that the singer empowers women, champions marginalized voices and is involved in philanthropic causes. "Talk about mom goals!" Morgan said. On cue, the camera cut to Pink's 8-year-old daughter. . .who was too busy eating a snack to really care about mom's big award, which Pink found hilarious.

Anyway, Pink's speech started off funny ("I looked up 'People's Champion' and Rocky Balboa came up. Which I thought was fitting, because I'm from around Philadelphia and I like to wear sweatpants and I like to fight people.") and turned serious as she talked about the current divisive culture and how "kindness today is an act of rebellion."

"There are people that don't have what you have, help them get it," she said. "There is a planet that needs help. It feels good to help, it feels powerful to help. Stop fighting each other and help each other."

In one of those classic People's Choice Award moments, Sprouse - best known for CW's Riverdale - snagged the drama movie star trophy for Five Feet Apart, in which he plays a rebellious teen with cystic fibrosis. Sprouse won over the likes of Brad Pitt, Leonardo DiCaprio, Samuel L. Jackson, Lupita Nyong'o and more. And he saw the humor.

"To some of the other newcomers in this category, specifically DiCaprio and Pitt - just keep your heads up, you know, don't let this dishearten you," Sprouse deadpanned as the crowd cheered. "You guys are gonna be here one day. The three of us, we've had this competition for a long time. But apparently this is my year."

Quite a few adults were horrified by the graphic scenes of sex and drug use in HBO's drama Euphoria, about a group of suburban California high school students. But then, many viewers also connected to the series, which The Post's Sonia Rao described as "a brutally honest answer to what growing up Gen Z might be like." When Zendaya won the drama TV star prize for her role of Rue, a drug addict who returns to school after rehab, she addressed the fans.

" Euphoria and Rue, I think, is one of the most beautiful things that's ever happened for me," Zendaya said. "Thank you to all of you for receiving it with open hearts. And to anyone who has felt seen by our show, on behalf of the cast and crew and everyone, that's all we really ever wanted. So thank you for allowing us to do that."

It's Aniston's world and we're just living in it, especially this month, when she has a new Apple TV+ show to promote. Her good friend Adam Sandler presented her with the People's Icon award, and Aniston rewarded viewers with an earnest speech that referenced "The Rachel."

"If I have any claim to this word 'icon,' it's only because I was able to be on an iconic show with an iconic cast and an iconic haircut," she said. " 'Friends' was truly the gift of a lifetime, and I would not be standing up here without that amazing show, without those amazing five other actors, and with an audience who stuck with us for a decade. Through streaming services now, and syndication ... you believed in us, you really did. And you believed in those very impossibly large apartments."

She also, of course, masterfully worked in a plug for her new series: "It feels so good also that I get to be back on television where it all really started. And I'm so excited! I'm with another incredible ensemble cast on The Morning Show. So thank you for tuning in to that."

Ken Jeong: You Complete Me, Ho

Leonardo DiCaprio, Once Upon a Time in. . .Hollywood

Brad Pitt, Once Upon a Time in. . .Hollywood

Ali Wong, Always Be My Maybe

Dwayne Johnson, Fighting With My Family

Keeping Up with the Kardashians (E!) - winner

The Real Housewives of Atlanta (Bravo)

Sterling K. Brown, This Is Us (NBC)