People Refused To Work With Me Because I'm A Woman, Says Parched Director 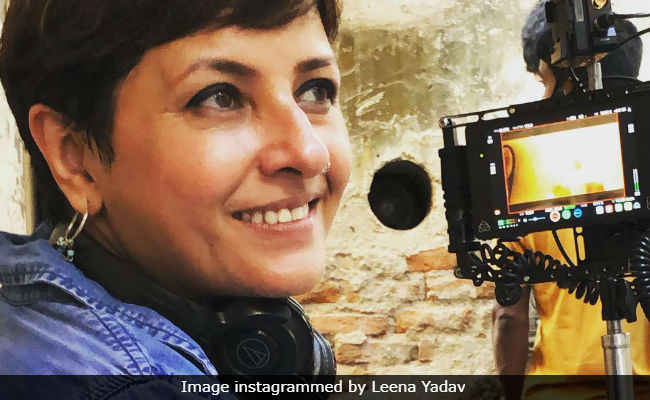 Leena Yadav on the sets of a film. (Image courtesy: Instagram)

Leena Yadav on Monday said that there have been instances where people have refused to work with her because she was a woman filmmaker. The director, who started her career as an editor, recounted an incident where clients not only cast a doubt on her ability but also asked her to prove her proficiency. "I had lots of people refusing to work with me because I was a woman. I remember one incident where those days we used to work on high band (camera). These clients walked in and I was hired as a freelance editor. They looked at me and said, 'You are the editor?' I said 'I am'. They said, 'Then you should know everything' and took off all the wires. He said, 'Then you should also know the wiring of this place'. And I did the wiring and I did know it. Then I said, 'You know what? I don't want to work with you.' And I walked out," Leena said.

The director was speaking at the in-conversation session 'Calling The Shots: Women Directors in Indian Cinema', moderated by director Shashank Khaitan at the International Film Festival of India (IFFI). Also a part of the panel were directors Gauri Shinde and Meghna Gulzar.

Leena, who directed critically acclaimed Parched, said after this incident, she stopped caring about people who practised discrimination as she believes it was "their problem", not hers. She said she has never had any issues with the actors she has worked with since, adding "They know that I know their characters better than them".

The director, who has worked with acting greats such as Amitabh Bachchan and Ben Kingsley in Teen Patti, recounted an incident from the sets of the 2010 thriller. "I remember Ben Kingsley said this, 'Do you realise she knows the character better than we will ever know even after we finish the film. So I think we should just quietly listen to her'," she said.

Leena also shared how she never thought her directorial debut, Shabd in 2005 was a film that was suited for stars. The cast included Aishwarya Rai, Sanjay Dutt and Zayed Khan. "I didn't think Shabd was a film for stars. It was a very independent kind of film. But my producer Pritish Nandy felt that we should. Then we went to narrate it to the stars and they agreed, which was a shock to me. While making the film, I realised even the actors were not ready for a film like that. My characters were all grey and somewhere they (actors) started getting a bit panicky and started crying in the film to get sympathy," she said.

She got "an instant PhD into film industry politics" when the film bombed at the box office, she said.

"I was literally asked to leave town for various reasons... It was heart-breaking and I had never experienced anything like that. Then for six months, I could not function. It was like I was standing naked on the road and everyone was whipping me from all over the place. Then I kind of focused my mind to writing my second film, which I thought nobody would produce. I got to make my next. I realised that's what the journey is," she said.

"I thought making the first film will be the toughest but it gets tougher and tougher. First film is the purest. Even you're not trying to cater or censor, it comes from a place of beautiful innocence that I'm constantly trying to go back to," said the filmmaker, whose next Rajma Chawal is slated to release on Netflix Friday.

On the other hand, Gauri Shinde said she never thought that "it's a man's world" and she set to follow her dreams from the word 'go'. She said: "I just took it for granted that if you have a dream you just go ahead with it. So it didn't really strike me. All these questions have happened after I had made a film. I've been asked 'so this tough path or the less-travelled path'. One doesn't really think of the path that you take, you just start your journey."

"You go there and the path then just happens. Yes, it makes a difference, when you see that some inspiring women, and actually even men, are doing great work. That makes you think that even I can do this," she added.

The adwoman-turned-film director debuted with English Vinglish, which served as late veteran actor Sridevi's comeback vehicle in 2012. Gauri said she decided to co-produce the 2012 film with husband, filmmaker R Balki as she did not want to surrender creative control.

The director said second guessing what the audience wants is failed question. "A middle-class middle-aged woman in a sari as a protagonist of a film was not very exciting for anybody. They said, 'Oh very nice, but is she not going to dance?' and all of that. I didn't want to bend or compromise on anything," she said.

"Which is why we decided to produce the film -my husband and I. The success of it, but more than the love that I received reassured me that 'Yes, sticking to what I believe in and putting it out there, if you're really interested in that, you'll find some people interested in it. You cannot second guess the audience, you cannot second guess what's working. And 'What does the audience want?' I think, is a failed question. 'What do you want?' is the question," said Gauri Shinde.

The director, who has worked with Shah Rukh Khan and Alia Bhatt in her second film Dear Zindagi, said she is not star-struck once they start production. "Once we are engaged to start the project, they are not stars anymore. They are co-workers, they are team members. I am not in awe of them. I have tremendous respect, but then it's about what we bring to the table together as a team," she said.

(Except for the headline, this story has not been edited by NDTV staff and is published from a syndicated feed.)
Comments
leena yadavleena yadav filmswomen directors in india