Parmanu Movie Review: John Abraham Does His Best But The Film Never Explodes To Life

Parmanu Review: John Abraham does his best to lend some frisson to his role, but he is weighed down by a ridiculously fanciful screenplay. 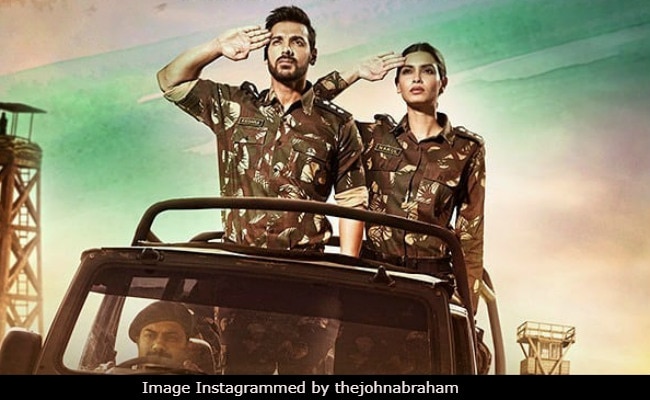 Abhishek Sharma's Parmanu - The Story Of Pokhran is a tale without a sting. In this anything-goes, post-truth film, fact and fiction are freely and selectively mixed to whip up patriotic fervour around a nuclear test that India conducted two decades ago. Those explosions in Pokhran were more about technology than military heroism. That distinction isn't allowed to come in the way of the film's priggish tone, which serves to uphold the skewed notion of strength and muscularity that is peddled nowadays for us to aspire to as a nation.

But no matter how hard the makers try to fuse dubious intent with ill-considered execution, Parmanu is a damp squib of colossal dimensions. It never explodes to life. While claiming "based on a true event" status and liberally incorporating footage of Bill Clinton, Benazir Bhutto, Nawaz Sharif and, above all, Atal Bihari Vajpayee speaking on camera, the screenplay throws a whole lot of fictional elements into a messy pot. This results in a film that is caught in cross-signals so dreary and humdrum that even rocket science would seem exhilarating in comparison.

The Parmanu script, which unabashedly attributes the success of India's nuclear programme to one prime minister and his chief scientific adviser, serves a deliberate, blatantly lopsided, please-the-current-powers-that-be purpose. It suggests that nobody in India had ever thought of tapping nuclear power as a means to ensuring both security and peace for the nation. That obviously is an overt falsehood aimed at erasing the names of Jawaharlal Nehru, Homi Bhabha, Indira Gandhi, Vikram Sarabhai, Raja Ramanna and others from the roll of honour, if we are willing to associate honour and humanity with any policy that rides solely on brazen bellicosity.

This film would have us believe that India's nuclear programme was the brainchild of a resolute, unwavering 1990s engineer-bureaucrat who put his personal and professional life on the line for the greater glory of the nation. The covert mission spearheaded by him and his handpicked team, which is projected as a race against time, US surveillance and other grave challenges, is as scintillating as watching a television weather forecast.

History to repeat itself TODAY !! Literally! TODAY at 3.45pm get ready to witness the trailer launch of the iconic historical event that turned India into a Nuclear Super Power exactly 20 years ago !! Same Date - Same Time - the thrilling trailer of Paramu - The Story of Pokhran shall be launched. Stay tuned. Releasing in theatres - 25th May @DianaPenty @bomanirani @johnabrahament @ZeeStudios_ @KytaProductions @poojafilms @deepshikhadeshmukh

Early on in the film, this lionized government functionary, Ashwat Raina (John Abraham), son of a gallantry award-winning army officer, grandly pipes up at a stuffy official meeting: "It is time for India to become a nuclear state." His earnestness takes our breath away, but his boss, a sceptical minister, looks askance at his suggestion and even ridicules him.

The floppy disc that Raina hands over to one of the officers in the room is quickly reduced to a coaster on the table. But the politician, who has a direct line to the Prime Minister, seeks to hog the credit for the nuclear test plan. When the project backfires - this is in 1995 - he instantly washes his hands of the aborted test. Ashwat Raina is scapegoated and handed an "immediate termination" order.

The ultimate countdown to the mission begins. A thrilling journey of patriotism & pride launches on 4th May 2018. #1MonthToParmanu but a shocker drops your way tomorrow itself! @dianapenty #AbhishekSharma #Bomanirani

A song blares on the soundtrack - Parmanu eschews many of the conventions of commercial Hindi cinema but cannot resist bunging in mood-highlighting musical numbers - to point to the wronged man's state of mind as he is banished to Mussoorie. There, he coaches aspiring civil service officers while his astrophysicist-wife Sushma (Anuja Sathe) shoulders the responsibility of raising their nine-year-old son.

Raina's life takes another turn three years on when Himanshu Shukla (Boman Irani) assumes office as the new principal secretary to the Prime Minister and summons him back for another shot. The Mahabharata comes in handy and, slipping into the role of Krishna, Raina puts together a team of five Pandavas - a scientist, a technocrat, a surveillance man, a woman from the space agency (Diana Penty), and an army major - to attempt a series of nuclear explosions in the army range in Pokhran where Indira Gandhi had tested "Smiling Buddha" nearly a quarter century ago. The earlier test is referred to by the protagonist, but only dismissively. It was for peaceful means, so it does not count, he says.

Raina's mission is what Parmanu - The Story of Pokhran is all about, but at no point does the film manage to capture the urgency of the operation, which entails dodging detection by US spy satellites, destructive sandstorms and bouts of self-doubt. The six operatives look like a bunch of eager-beavers playing hide and seek in the desert heat. Indeed, Parmanu is never more engaging than that.

Raina wants to do something for the country. His wife says to him: "Hero vardi se nahi iraadon se bante hain (It isn't the uniform that make a hero, it is his resolve)." The man takes that exhortation to heart. His subsequent foray into the unknown resembles a boring stroll in the park that is occasionally interrupted by a marital misunderstanding and interventions by two spies working for the CIA and ISI in the area.

John Abraham is a co-producer of this film, so there is no reason to surmise that he does not believe in what Parmanu is trying to achieve as a film. He does his best to lend some frisson to his onscreen role, but he is weighed down by a ridiculously fanciful screenplay (jointly written by Sanyukta Sheikh Chawla, Saiwyn Quadras and director Abhishek Sharma). He really cannot make much progress against the headwinds.


Promoted
Listen to the latest songs, only on JioSaavn.com
Diana Penty, playing as an all-knowing busybody who is the mission's operations point person, is pretty. But she is pretty unconvincing, too, in her perfectly coiffured and neatly attired look in the midst of a life and death project.

In one scene, the hero blames his flat foot for his failure to break into the army. He could well have been speaking about the film as a whole. Parmanu - The Story of Pokhran is as a flat as a pancake, a hopelessly limp exercise with creaky nucleus that is buried under a mound of forced tropes before it can get going.