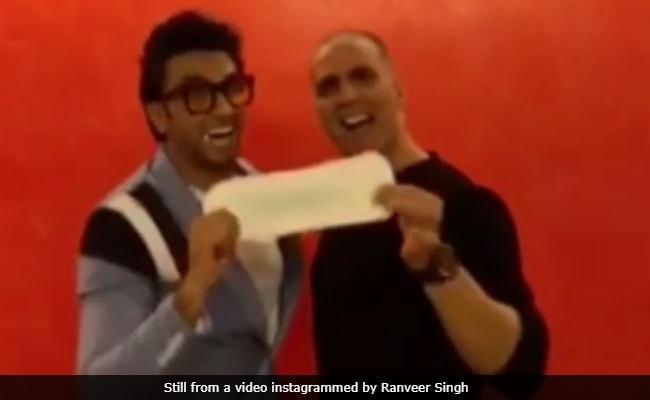 New Delhi: Ranveer Singh was a little late for the 'PadMan Challenge' but he more than made up for it with his superb gig with Akshay Kumar vis-a-vis Dubsmash. PadMan opened on Friday and on the same Ranveer posted a Dubsmash video with Akshay in which the two actor can be seen grooving to a portion of PadMan title track. In the end, they pose with a sanitary pad in hand. "All the best to my Superhero Akshay Kumar for PadMan," Ranveer captioned the post. Before the film's release, celebs like Aamir Khan, Alia Bhatt, Anil Kapoor, Arjun Kapoor and Varun Dhawan among others took the PadMan challenge.

All the best to my Superhero @akshaykumar for @padmanthefilm ! In theatres today!

Ranveer Singh starred in January-release "Padmaavat," which owes its solo release on Republic day weekend to PadMan. Akshay Kumar shifted the release date of his film to accommodate Sanjay Leela Bhansali's embattled "Padmaavat." He has said that team "Padmaavat"'s need was greater than theirs.

However, generating publicity for a colleagues' film is not new for Ranveer Singh (even without the "Padmaavat" favour). Ranveer had earlier promoted Akshay's Rustom in a hilarious video. Here's a recap to refresh your memory.

This is what Ranveer did for Shah Rukh Khan's Fan:

The Father of all ... 'Motion Posters' @iamsrk#JabraFanpic.twitter.com/QunVzCvmEa

And no one can forget Ranveer's Bang Bang! challenge for Hritik Roshan: