Oscars 2020: Count All The Celebs In Charlize Theron's Star-Studded Selfie 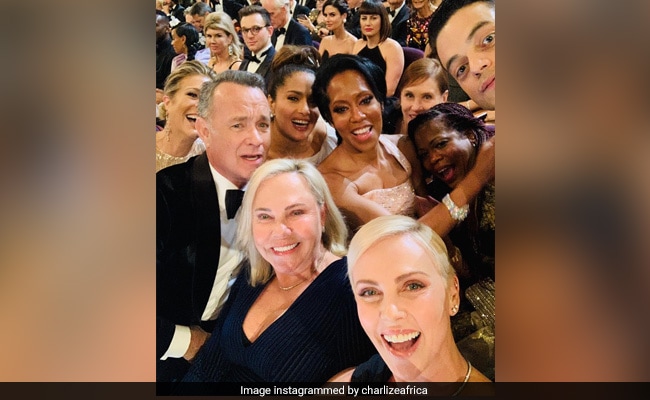 Once upon a time at the Oscars, Ellen DeGeneres took a classic selfie with Hollywood's biggest stars that featured Bradley Cooper, Jennifer Lawrence, Meryl Streep, Brad Pitt, Angelina Jolie, Lupita Nyong'o and Jared Leto (Phew!) The aforementioned selfie, which was clicked at the 2014's Oscars, turned out to be the most re-tweeted post of the year and we are not surprised at all, keeping into considering the massive popularity of all the stars. Which reminds us why we brought this up today - 6 years later, another iconic selfie was clicked and shared by this year's Best Actress nominee Charlize Theron. The Bombshell actress posted a star-studded selfie on her Instagram profile on Tuesday night. It features the actress alongside big names like Tom Hanks, Regina King, Salma Hayek, Rami Malek and Rita Wilson. Charlize captioned the picture: "Good company. Oscars 2020."

For those who forgot how awesome the 2014 Oscar selfie shared by that year's host Ellen DeGeneres was, here's a reminder:

"If only Bradley's arm was longer. Best photo ever," Ellen DeGeneres captioned it. Just like last year, Oscars decided to go without a host this year as well - the first time in three decades -after their original choice Kevin Hart pulled out when old homophobic tweets of his resurfaced in 2019.

Charlize Theron shared a picture from her red carpet moment at this year's Academy Awards. The actress looked like a million bucks in a black thigh-high slit gown by Dior. She captioned her post: "And that's a wrap on awards season! Thanks to everyone who went on this crazy, wonderful ride with me."

...and that's a wrap on awards season! Thanks to everyone who went on this crazy, wonderful ride with me @tiffanyandco @dior @lesliefremar @hairbyadir @kateleemakeup #ad