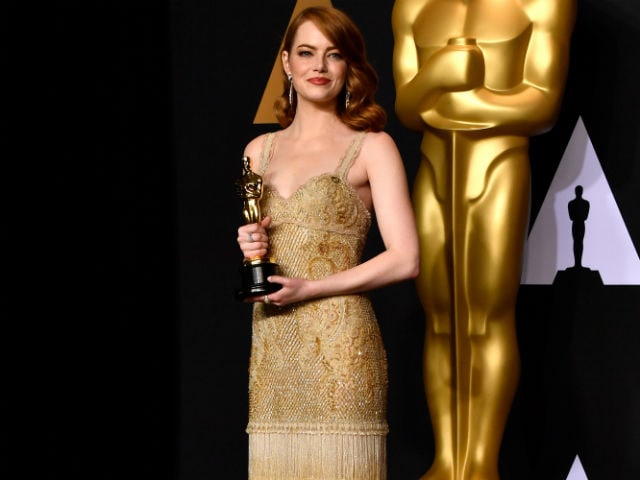 Emma Stone poses with the Oscars in the press room (Courtesy: AFP)

New Delhi: The plot thickens in the stunning Oscar finale that saw the Best Film awarded first to La La Land and then, when the producers were already on stage and making their speech, to the real winner Moonlight. It's the sort of inglorious yet exhilarating moment that the Academy Awards aren't going to be able to shake off, ever. The mistake was attributed to presenter Warren Beatty being given the wrong envelope - one that contained the Best Actress' name but backstage at the Oscars, the winner of that award, Emma Stone, told the press that she had the Best Actress envelope in her hand all the while. A mystery of two Best Actress envelopes, then?

In the press room, Emma Stone said, "I was holding my Best Actress in a leading role card all the time. I don't mean to start stuff but whatever that story was, I had the card. So I'm not sure what happened. And I really wanted to talk to you first." Emma is the star of La La Land, the film which won Best Film and then didn't.

Does this, then, clear poor Leonardo DiCaprio was being blamed for the mix-up? Leo had just presented Emma with the Best Actress Oscar and social media assumed he had dumped the envelope he was carrying in such a manner that it ended up with Warren Beatty.

There was an indication of the chaos to come when Warren Beatty opened the envelope he had been given and looked at co-presenter Faye Dunaway in puzzlement. Watching the Oscars on TV, former host Neil Patrick Harris appeared to have noticed the envelope flub before anyone else.

Warren Beatty seems to be opening an envelope that says 'Actress in a Leading Role'. He must have been handed the wrong one somehow. Yikes. pic.twitter.com/Rma4wp80aX

Promoted
Listen to the latest songs, only on JioSaavn.com
Moments later, confusion descended on the Oscar stage like the candy that had been parachuted down to the guests earlier. "Moonlight, you guys won Best Picture. This is not a joke," announced La La Land producer Jordan Horowitz, waving the correct name card at the camera. In the audience, Moonlight director Barry Jenkins and actor Mahershala Ali hugged. A sheepish Warren Beatty tried to explain that he had been given the wrong envelope. Later, Oscar auditors PriceWaterhouse Coopers apologised, saying, "We sincerely apologize to Moonlight, La La Land, Warren Beatty, Faye Dunaway, and Oscar viewers for the error that was made during the award announcement for Best Picture," reported news agency AFP.

Unlikely that the blooper will ever be forgotten but the silver lining, should you need one, was surely the grace with which Team La La Land made way for Moonlight. That was a true Hollywood moment.

Oscars 2017: I Am Alive And Well, Says Jan Chapman On Tribute Video Flub