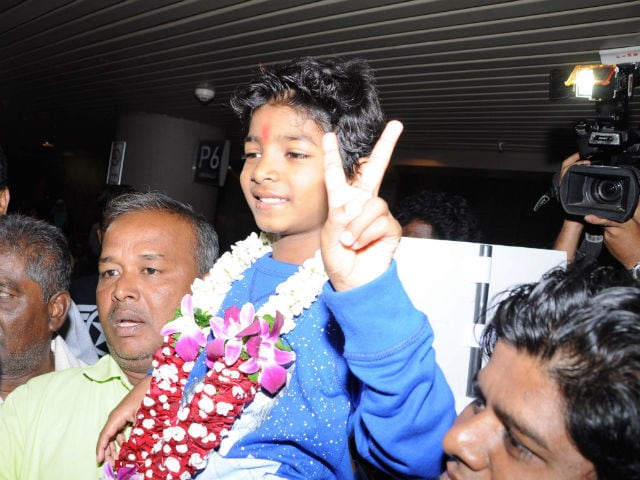 Sunny Pawar at the Mumbai Airport

New Delhi: Sunny Pawar, the eight-year-old Lion actor who won millions of hearts at the 89th Academy Awards, received a blockbuster welcome at the Mumbai airport when he flew home from Los Angeles on Tuesday night. He was accompanied by his father, Dilip Pawar. The young actor told news agency PTI that he had a 'great time' at the Oscars. "I had a lot of fun at the Oscars. I am really happy and I really enjoyed attending the Oscars," he said. Sunny was quite the star of the show. Oscar host Jimmy Kimmel recreated an iconic The Lion King moment with Sunny as Simba. He also posed with actor Andrew Garfield on the red carpet.

Here are scenes from the reception Sunny Pawar received in Mumbai, complete with garland and teeka: 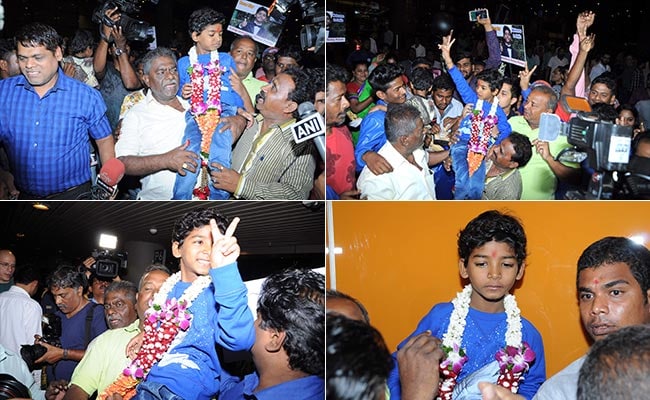 Sunny Pawar at the Mumbai Airport

Lion, directed by Garth Davis, features Dev Patel, Rooney Mara, David Wenham and Nicole Kidman in lead roles. The film is based on the non-fiction book A Long Way Home by Saroo Brierley. Sunny Pawar portrayed the role of young Saroo Brierley in the film - Dev Patel played the older version and was nominated for the Best Supporting Actor Oscar. Lion is the true story of an Australian of Indian origin who uses Google Earth to trace his birth family.

Sunny's family in Mumbai's Santa Cruz neighbourhood were unable to watch his Oscar debut live because of a faulty cable connection. His grandfather told PTI: ""We all are very happy that Sunny has reached this far. It all seems like a dream. Unfortunately, we couldn't see the Oscars due to some technical problems we will surely watch it soon."

His mother added that Sunny is a 'movie buff' and Krrish is one of his favourite films. "I don't know what to say. It's all happening too quick. Happiness is a small word to describe my feelings at the moment. We are thankful to the entire team of Lion," she said.

Meanwhile, Sunny Pawar told NDTV that he wished to act in films in future. However, he has no offers yet and he would be concentrating on his studies. He told, "His parents have supported him throughout and he wants to pursue acting irrespective of Bollywood or a Hollywood film." He further added, "He didn't face any problem while auditioning for Lion and the director used to talk in English and then a translator used to make him understand."

Promoted
Listen to the latest songs, only on JioSaavn.com
Sunny Pawar was also photographed at the pre-Oscar dinner, along with his Lion co-star Dev Patel, ahead of the award ceremony on Sunday night.