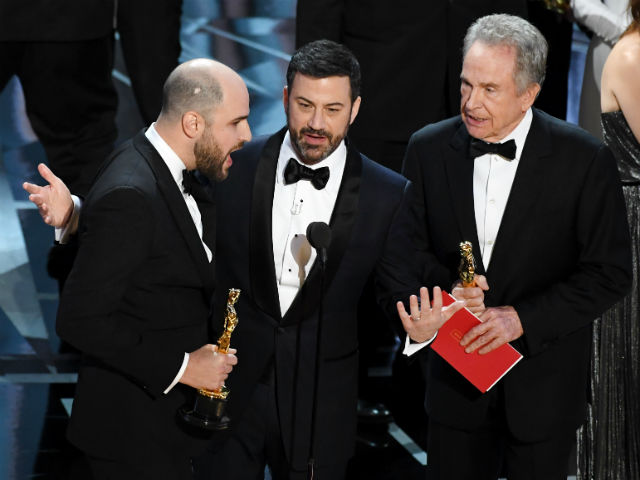 New Delhi: The Oscars Best Film blunder was followed by an apology from auditing firm Pricewaterhouse Coopers, which is responsible for formulating Oscar ballots. Pricewaterhouse Coopers, which also operates by the name of PwC, released a "sincere apology" addressed to Team Moonlight, La La Land and the entire viewers of Oscars, reported news agency AFP. In a statement of apology, PwC admitted that actor Warren Beatty and his Bonny And Clyde co-star Faye Dunaway were handed the wrong envelope to read out the Best Film Oscar winner from. It all started when Mr Beatty opened the envelope and Ms Dunaway took over to announce Damien Chazelle's La La Land as the winner of the top award of the night. Soon, the correct announcement was made and Moonlight was announced as winner of Best Picture.

"We sincerely apologize to Moonlight, La La Land, Warren Beatty, Faye Dunaway, and Oscar viewers for the error that was made during the award announcement for Best Picture," the company said in a statement, reported AFP.

"The presenters had mistakenly been given the wrong category envelope and, when discovered, was immediately corrected," the statement added. A little backstory here. Ahead of the corrected announcement, La La Land producers Jordan Horowitz and Marc Platt were already delivering their acceptance speech when Martha Ruiz, partly responsible for organising the Oscar ballots notified the change. Mr Horowitz immediately took the mic to declare: "Guys, guys, I'm sorry. No. There's been a mistake," he said. "Moonlight, you guys won best picture. This is not a joke."

Team PwC also mentioned that they are carrying out an investigation into the big blunder. "We are currently investigating how this could have happened, and deeply regret that this occurred," the statement added.