Oscars 2017: A Breakdown Of Exactly How The La La Land-Moonlight Shocker Happened 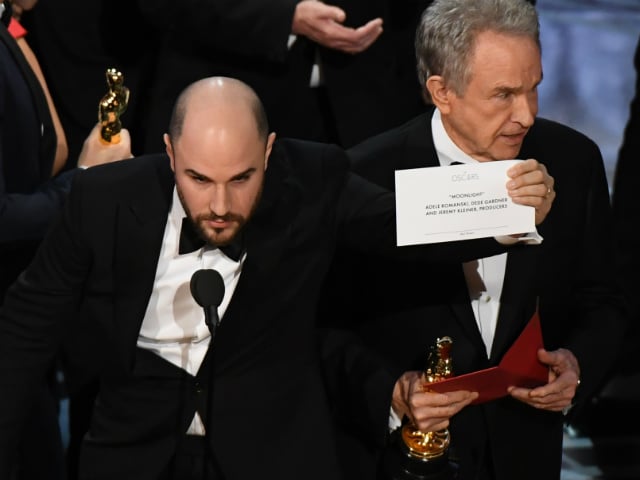 Washington: In what is most certainly the most shocking moment in Oscars history, Faye Dunaway announced the wrong winner for best picture at the end of the night, awarding the trophy to La La Land when it actually was supposed to go to Moonlight.

It all started as Dunaway's co-presenter, Warren Beatty, opened the envelope to read the winner for best picture. He looked confused, took a long pause, and then looked over at Dunaway, who clearly thought he was doing some sort of bit. "You're awful!" she said, as the crowd laughed nervously. "God." Beatty then handed the envelope to Dunaway, who announced La La Land.

The cast and crew of La La Land (which had already won six awards during the ceremony) arrived on stage to accept the award. Producers Jordan Horowitz and Marc Platt delivered their speeches, when all of a sudden there was a flurry of activity on stage.

A man with a headset started talking to several people on stage, as did Martha Ruiz, only one of two accountants in charge of tabulating Oscar ballots - and therefore only one of two people who knew all the winners before the show.

As people were conferring behind him, producer Fred Berger stepped up the microphone. He was in the middle of thanking his family when he briefly turned around. "We lost, by the way," he said. Huh? That's when Horowitz stepped forward again. "Guys, guys, I'm sorry. No. There's been a mistake," he said. "'Moonlight,' you guys won best picture. This is not a joke."

Cue confused gasps from the crowd, which quickly turned into a standing ovation. "This is not a joke," Horowitz repeated. 'Moonlight has won best picture." He held up the card that proved it: "'Moonlight.' Best picture."

As the audience (and millions of viewers) tried to process what happened, the camera panned to the cast of Moonlight in the crowd, clearly in shock and hugging each other.

Host Jimmy Kimmel arrived on stage to help sort things out, and crack jokes. "I think you guys should keep it anyway," he said. "Guys, this is very unfortunate what happened. Personally, I blame Steve Harvey for this."

Kimmel turned to Horowitz. "I would like to see you get an Oscar, anyway," he said. "Why can't we just give out a whole bunch of them?"

Horowitz demurred: "I'm going to be really proud to hand this to my friends from Moonlight," he said.

Beatty stepped forward to try to clear up the confusion.

"Warren, what did you do?!" Kimmel yelled.

Beatty went on to explain he had paused earlier when he looked at the envelope was because it said "Emma Stone, La La Land." Stone had just won best actress.

"That's why I took such a long look at Faye . . . I wasn't trying to be funny," Beatty explained to the audience.

"Well, you were funny," Kimmel said.

An additional wrinkle was added to the saga backstage, where Stone explained that she was on stage after La La Land was announced as winner with her best actress Oscars and card in hand.

"Of course it was an amazing thing to hear La La Land, " Stone said. "We would have loved to have won best picture. But we are so excited for 'Moonlight.' I think it's one of the best films of all time. I was also holding my 'best actress in a leading role' card that entire time. So whatever story, I don't mean to start stuff, but whatever story that was, I had that card."

E! reported that Warren Beatty was handed the wrong envelope, and showed a close-up shot of the envelope labeled as such.

Horowitz gave a play-by-play after the ceremony on E!, explaining that he had taken the envelope after the winner was announced and held it the card as he gave his acceptance speech.

"There was a guy, a stagehand guy, who started kind of buzzing around, looking for the envelope," Horowitz said.

Eventually, the envelope was found. He "opened it, and it said 'Emma Stone, La La Land on it," Horowitz said. "At that moment, it was clear there was a problem. They eventually found the best picture envelope."

Meanwhile, also backstage, Moonlight director Barry Jenkins said he's a longtime Oscar viewer, and had never seen anything like this happen before.

"I noticed the common and I thought something strange had occurred, and I'm sure everybody saw my face, but I was speechless when the result was offered," Jenkins said. "So it made a very special feeling even more special, but not in the way I expected."