Once Upon A Time In Hollywood Poster A Photoshop Fail? Twitter Is Looking At You, Brad Pitt

While much of the dramatis personae in Once Upon A Time In Hollywood are based on real people, the roles played by Leo and Brad are fictional 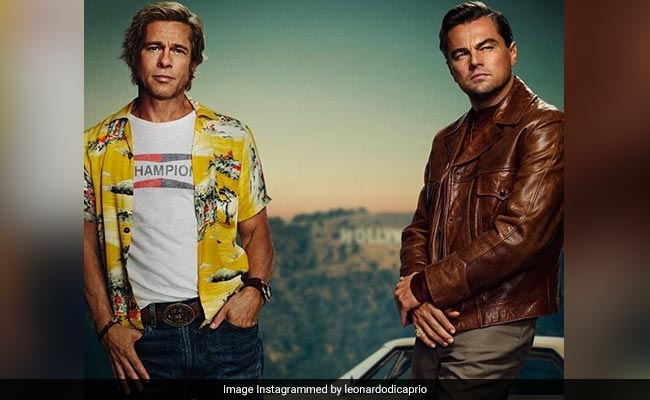 The Internet has invoked the P-word after the first poster for the new Quentin Tarantino film Once Upon A Time In Hollywood dropped yesterday. The film, based on the Manson Family murders in 1969, stars Leonardo DiCaprio as a TV star and Brad Pitt as his stunt double. Both actors feature on the poster, outfitted Sixties-style, leaning away from each other. While much of the dramatis personae in Once Upon A Time In Hollywood are based on real people, the characters played by Leo and Brad are fictional. As such, we don't know how old they are meant to be in the film and Twitter smells a Photoshop rat. Brad Pitt has been digitally made to look younger than his 55 years, suspects social media, possibly with the intent of making him appear the same age as Leonardo Di Caprio who is 44.

good lord, did they have to make brad pitt in cgi or is this just some terrible, terrible photoshop #OnceUponATimeInHollywoodpic.twitter.com/zglSb1dc8Q

What is going on with the photoshop work on Brad Pitt in this #OnceUponATimeinhollywood poster?

Leo looks like a younger Leo. Brad Pitt does not look like Brad Pitt. Still, looking forward to this movie.#OnceUponATimeInHollywoodhttps://t.co/OOlwuLAcMM

Twitter was also getting a distinct Ace Ventura vibe from Brad's shirt:

Plus, there were other unanswered questions:

What the heck are they leaning on??#OnceUponATimeInHollywoodpic.twitter.com/6ri7I6Suoy

A couple of optimists made the case for what seems to have been deemed a bad Photoshop job:

I love how the poster for Tarantino's latest remembers 1969 had no decent photoshop software - so it hasn't used it either. QT is so meta. #OnceUponATimeInHollywood#Tarantinopic.twitter.com/QINmwYYyPz

I'm gonna go on the opposite side and say the crappy poster for #OnceUponATimeInHollywood is intentional because the film takes place in the 60s/70s.
That, or the graphic designer really is trash LOL.

And there was a bit of creative Photoshopping on the part of fans as well:

This is the extended male cast poster! #OnceUponATimeInHollywoodpic.twitter.com/bvJQ71jDQF

Once Upon A Time In Hollywood stars an impressive ensemble cast of actors, among them Margot Robbie as Sharon Tate, the actress and wife of filmmaker Roman Polanski who was murdered while pregnant by cult leader Charles Manson and his followers. In August 1969, the Manson Family stormed the Los Angeles residence of Sharon Tate and Roman Polanski (who was away filming), and killed her and four others present at the house.

The cast of Once Upon A Time In Hollywood also includes Al Pacino, Emile Hirsch, Damian Lewis, Dakota Fanning, Bruce Dern and Lena Dunham. Luke Perry, who died this month of a stroke, also has a role. Australian actor Damon Herriman plays Charles Manson, a role he was also cast in on the Netflix series Mindhunter. Tarantino regulars Tim Roth and Michael Madsen also appear in Once Upon A Time In Hollywood, which will release on July 26.

Comments
once upon a time in Hollywood posterleonardo brad pitt