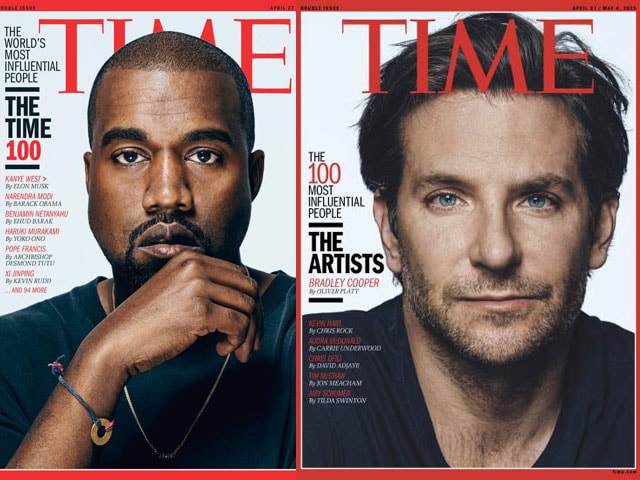 Kanye West and Bradley feature on the cover of the magazine Image courtesy: TIME.com

Below, excerpts from their Time profiles.

Bradley Cooper, 'Cinematic chameleon.' Profiled by actor Oliver Platt: "I met Bradley Cooper in 2007, shooting an arc on the FX drama Nip/Tuck. Our characters had this wonderfully twisted relationship: I was a closeted TV producer in mad, unrequited love with Bradley, the ambitious, manipulative star of my soap opera. During our first take, he grabbed me by the lapels, threw me against a wall and launched into this insane in-character, off-script rant about how my not going to the gym was breaking his disgusted heart. Apparently, in our line of work, this is how great friendships begin. Turns out this psycho was in fact a loving, grounded, hardworking fellow whose priorities in life are his dog Charlotte, the Philadelphia Eagles and showing up for people he cares about."

Taylor Swift, 'Pop phenomenon.' Profiled by actress Mariska Hargitay: "Along with her staggering list of accomplishments, perhaps the most exciting thing about Taylor is that she's just getting started with what she plans to mine from her fierce, curious, boundlessly talented and beautiful heart."

Emma Watson, 'Inclusive inspiration.' Profiled by former New York Times editor Jill Abramson: "Emma Watson's alter ego Hermione Granger would doubtless approve of her HeForShe campaign and its gutsy, smart take on feminism. It's also refreshing to see her vigorous embrace of feminism, which Watson defines as "the theory of political, economic and social equality of the sexes." And apparently she lives by it. Although she is one of the world's highest-paid actresses, she has spoken out about the paucity of female directors in Hollywood."

Reese Witherspoon, 'Hollywood power player.' Profiled by Mindy Kaling: "The reason Reese is on this list is that she is no longer just a talented and famous actress. She is an icon. Yes, she is beautiful, and I would buy any lipstick or bottled water she is selling. Hell, I'd buy cigarettes if her picture were on the pack. But that's not it (even though I think she could make a lot of money doing that). Reese is an artist, but she is also a hustler, a quality I recognized in her the first time I met her. She's impatient that Hollywood won't generate the kind of quality roles she wants to play, so she creates quality roles by creating quality movies."

Julianne Moore, 'Fearless star.' Profiled by designer Tom Ford: "I was fortunate enough to witness Julianne's incredible skill as an actress firsthand when we worked together on a film that I directed called A Single Man. I remember looking through the camera lens before the first take and realizing that she projects something very rare: an actual luminosity that is dazzling in life and that can be captured on film. This is the difference between an actor and a star."

Kanye West, 'Boundary breaker.' Profiled by engineer-entrepreneur Elon Musk: "Kanye West would be the first person to tell you he belongs on this list. The dude doesn't believe in false modesty, and he shouldn't. Kanye's belief in himself and his incredible tenacity-he performed his first single with his jaw wired shut-got him to where he is today. And he fought for his place in the cultural pantheon with a purpose."

Richard Linklater, 'The unorthodox filmmaker.' Profiled by actor Ethan Hawke: "We may never understand Rick's unorthodox path and how it led to movies like School of Rock, Before Sunrise and Boyhood: the vegetarian baseball star from Huntsville, Texas; the years of hard labor on offshore oil rigs in the Gulf of Mexico; teaching himself the history of film through the ingenuity of starting the Austin Film Society (with the help of a local Kinko's and a 16-mm projector). But the consistent thread in Rick's career has been a passion for cinema that cannot be defeated or undermined in any way."

Julianna Margulies, 'An advocate on and off the screen.' Profiled by New York Senator Kirsten Gillibrand: "She puts her heart and soul into every issue she cares about. She's not afraid to dream big and do what she loves, whether it's in her acting career, in her advocacy or being a mom. It's because of women like Julianna that I know we can and will change the world."

Chris Pratt, 'A real leading man.' Profiled by Amy Poehler: "Chris Pratt is here to save us-from aliens, dinosaurs and general boredom. America has decided he is its next big movie star, and I understand why. It's not because of his broad shoulders and humble roots. It's not because he looks like the perfect combination of a guy you know mixed with a guy you want to be."

Lorne Michaels, 'King of comedy.' Profiled by Jack Nicholson: "I've had the pleasure of trailing Lorne during an episode of Saturday Night Live, editing as he goes, writing as he goes, directing as he goes. Hard to think of anyone more skilled at discovering extraordinary comedic performers, who have gone on to become household names in their own right. It's no wonder SNL's takes on current events have made headlines for 40 years."

Lee Daniels, 'Empire's creative engine.' Profiled by Oprah Winfrey: "He forces you, in every breath, to stay in character. To find the bone-marrow truth in every scene, no matter what it takes to get there. He's a truth seeker. "Less is more" is his credo. "Give me 1/8 of that" is one of my favorite notes from him."

Kim Kardashian, 'The first lady of #fame.' Profiled by Martha Stewart: "Beautiful in an exotic, totally exaggerated way, Kim exudes energy, sexuality, drama, determination, impetuousness and happiness. But she and her famous, entrepreneurial siblings-shepherded by a savvy, tireless matriarch-have also expanded the very definition of family."

Laverne Cox, 'Transgender icon.' Profiled by 14-year-old transgender advocate Jazz Jennings: "When Laverne and I met for the first time, it was honestly so exciting. She started screaming like a little girl, because she thought of me as a celebrity! She told me to keep up the good work, and how happy she was about my success. Now I want to do the same for her. Laverne, I love you and I'm so proud of you and you're definitely making a difference."

Audra McDonald, 'The angelic voice.' Profiled by Carrie Underwood: "Audra has accomplished incredible things in her career. She's won more Tony awards than any other Broadway performer, most recently for playing Billie Holiday in Lady Day at Emerson's Bar and Grill. But I feel the greatest legacy she will leave behind lies in the works she does for others."

Tim McGraw, 'Country's leading light.' Profiled by editor Jon Meacham: "When he first went to Nashville more than two decades ago, he was, as he puts it, "young, single and tearing it up," and his early songs reflected his life's manic pace. Now married to the luminous Faith Hill, with whom he has three daughters, McGraw is making music that's more about raising a family than raising hell-more about seeking lasting connection and celebrating continuity."

Kevin Hart, 'Humor's honest broker.' Profiled by Chris Rock: "Right now, Kev is the biggest stand-up comedian in the country. I don't even think there's a No. 2, to be honest. I wrote, directed and starred in Top Five with Kevin Hart. And I made sure Kevin was in every ad. I put emails from Kevin in my movie. I shouldn't have even called it Top Five; I should've called it Kevin Hart Presents Chris Rock's "Top Five With Kevin Hart." Hillary should announce Kevin as her running mate and be done with it."

Promoted
Listen to the latest songs, only on JioSaavn.com
Christopher Nolan, 'Philosopher of screen.' Profiled by Michael Caine: "Christopher is very secretive, and each film has a code title. He had us call Inception by the name Oliver's Arrow. On the set, no matter how hot it is, he wears an overcoat and sips tea all day. You wouldn't be able to pick him out as the director. There's no shouting and screaming-he's a very quiet gentleman. If you get it wrong, you just do it again. It's like working with a philosopher."

Bjork, 'Art's high priestess.' Profiled by artist Marina Abramovic: "If you are really true to yourself and really follow your intuition in the most rigorous way, there is a moment that becomes universal, that reaches everybody. That's the real magic of Bjork-she teaches us the courage to be ourselves."