On New Year's Eve, Sonam Kapoor, Kajol, Sonali Bendre And Others 'Look Back At 2018'

Some stars shared throwback pictures while other shared more recent ones, which were equally good 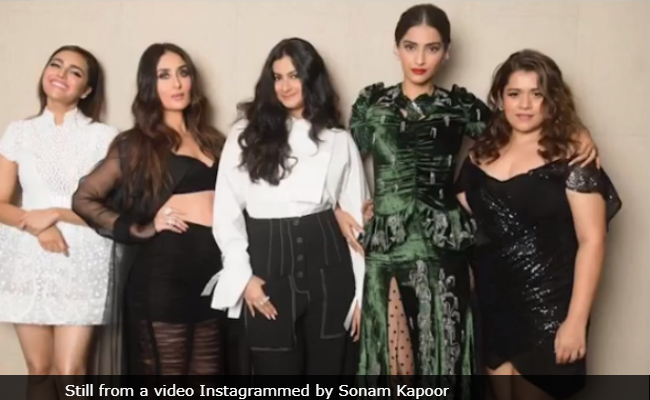 Hey Folks! Its' New Year's Eve today and what could be a possibly better way of bidding adieu to the year than reliving some of the best memories? Well, that's exactly what Bollywood celebrities are doing on social media. It wouldn't be wrong to say that the social media is currently bombarded with "looking back at 2018" posts but we are not complaining. Some stars like Sonam Kapoor,Sonali Bendre and Karisma Kapoor have shared their favourite throwback moments of the year, while other actors like Abhishek Bachchan and Arjun Kapoor are excited to welcome 2019 with open arms.

Looking back at old memories brings back a plethora of emotions and Sonam Kapoor's post is a perfect example of that. Sonam has chronicled her 2018 journey in the form of a video. The video begins with stills from PadMan (which was Sonam's first release in 2018) and ends with an inspirational quote. The video also showcases the major highlights of the year. It was a thrilling year for Sonam as she had three big releases this year - Sanju, Veere Di Wedding and PadMan - all of which performed exceptionally well at the box office. Sonam had a great year on personal front as well as she married her long-time longtime Anand Ahuja.

The end of the year always brings up thoughts about the future and calls for a little reminiscing as well! I've chosen 18 of my favourite, most special moments from 2018. Moments of love, celebration, laughter, family and art; moment that have made this year what it was! Thank you 2018.

Sonali Bendre, who was diagnosed with cancer this year, shared a bittersweet memory of the "last blow-dry" she had before she cut her hair. Read Sonali Bendre's post here:

Throwback to my last blow-dry before I cut my hair. Now that my hair is gradually growing back.... Maybe I can look forward to another blow-dry in 2019! This journey has been immense, and has taught me so so much.... From being in awe of the body's willingness and capacity to fight and heal and recover to overwhelming gratitude to the people who have stood by me and been pillars of strength to being reminded of life's transience and that things come and go (much like my hair). Here's looking towards a healthier and happier 2019. Onwards and upwards... #SwitchOnTheSunshine #OneDayAtATime

Kajol, who returned to the silver screen after two years with Helicopter Eela, also shared a stunning picture of herself and added a dash of her signature humour. She wrote: "Looking back at 2018....Still in red." Kajol also voiced the character of Elastigirl in the Hindi rendition of Incredibles 2. That's not it! Kajol's wax statue was unveiled at Madame Tussauds Singapore in May this year.

For Karisma Kapoor, the biggest highlight (or should we say highlights) were when she met the former US Secretary of State Hillary Clinton. Karisma shared pictures form both the meetings and wrote: "My favourite memory of 2018 has to be meeting Hilary Clinton on two occasions this year in our country."

Not a throwback per say, but Abhishek Bachchan's post was equally good. Abhishek Bachchan returned to films after 2 years with Anurag Kashyap-produced Manmarziyaan, for which he even received praise from the audience as well as the critics. The actor shared a photograph of himself from a picturesque location and wrote: "Walking into the new year like...Peace out 2018, thank you. Bring on 2019!"

Arjun Kapoor too shared an extensive note, in which he wrote about the bittersweet memories that 2018 gave him. He thanked his family and fans and even promised to be more "interactive" in the coming year.

Rolling my sleeves up & looking straight at you 2019 !!! 2018 is done and here we go 2019... thank you for teaching me so much 2018 I will never be the same again... the highs & lows the good & the bad it all taught me one thing life is more about living in the present being happy grateful & enjoying what I have worked so hard for... my family has been so amazing they give me strength, my friends as always have stood by me no mater what, the media has been gracious & understanding & my fans have given me the strength needed to fall 7 times & get up 8 because that's life. Promise to be more active & interactive with all of you in the coming year...enjoy the holidays wish u a happy new year everyone be safe & be happy... - @rohanshrestha

Here are some more posts shared by stars:

The year 2018 has been the most special year of my life I can't thank 2018 in more than one way. The year gave me Sonu. One of my career's most memorable character and a character that made me take my first step to face the actual flashbulbs in showbiz. So much love and adulation from my well-wishers is a surreal moment for me at times. This year is not just about success, it taught me that Patience, hardwork, dedication and dreams never fail. It pays off. So many years at the movies and I finally make my debut in the industry in different spheres. Thank you 2018 and all you well-wishers of mine. I know with your love and strength, I can warmly welcome the new year with all heart .

looking back at a year that will impact the ones to come - looking forward!!

What was your favourite moment in 2018? Tell us in the comments section below.