On Mother Nargis' Death Anniversary, Sanjay Dutt Writes: "Wish You Were Here With Me"

Nargis died in 1981 after battling a pancreatic cancer 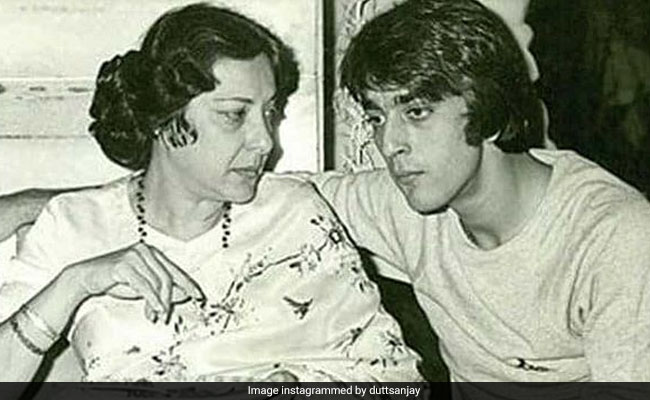 On the iconic actress Nargis' 39th death anniversary, her actor son Sanjay Dutt shared an emotional note on social media and expressed how much he "misses" her every day. He actor made a trip down memory lane and dug out an old photograph of himself and his mother from the time when he was quite young. In the black and white picture, Nargis appears to be saying something to Sanjay Dutt as he listens carefully to her. In his note for his mother, the actor wrote: "It's been 39 years since you left us but I know you're always by my side. I wish you were here with me, today and every day. Love you and miss you every day, Mom."

Nargis died in 1981 after battling a pancreatic cancer. A couple of days after her death, Sanjay Dutt's debut film Rocky was released in theatres but more on that later. First, take a look at Sanjay Dutt's post here:

It's been 39 years since you left us but I know you're always by my side. I wish you were here with me, today & everyday. Love you and miss you everyday Mom.

Nargis was best-known for her performance in the Academy Award-nominated Mother India, in which she co-starred with Sunil Dutt (whom she later married). She worked in several acclaimed films like Raat Aur Din, for which she won the National Film Award for Best Actress, Awaara, Chori Chori and many others.

Sanjay Dutt is the eldest of the three Dutt siblings and the only actor in the family after his parents Sunil Dutt and Nargis. On the work front, Sanjay Dutt's last projects include Kalank, Prasthanam and Panipat. He will next be seen in Mahesh Bhatt's Sadak 2, in which he will co-star with Alia Bhatt, her sister Pooja Bhatt and Aditya Roy Kapur. Sadak 2 is the sequel to the hit 1991 film Sadak. The original film, which was inspired by Robert De Niro's 1976 movie Taxi Driver featured Pooja Bhatt and Sanjay Dutt in the lead roles.