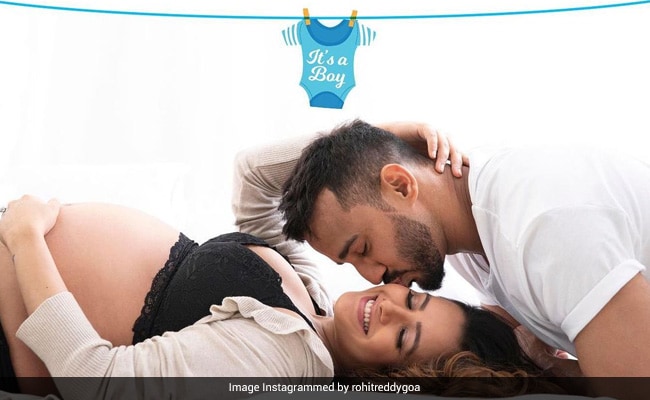 Congratulations, Anita Hassanandani and Rohit Reddy! The couple welcomed their first child - a baby boy - on February 9. Rohit Reddy made the big announcement with an "Oh boy!" post, which features a glimpse of Anita Hassanandani's pregnancy days. "It's a boy," says the baby announcement post. Congratulations poured in from the likes of Ekta Kapoor, Hina Khan, Ridhi Dogra, Nakuul Mehta, Kishwer Merchant, Karanvir Vohra, Barkha Sengupta, Raj Kundra, Surbhi Jyoti, Rannvijay Singha, Maanvi Gagroo and others. Ekta Kapoor, who is a single mom to son Ravie, commented: "Yay," while Sameera Reddy had this message for new dad Rohit Reddy: "Welcome to the amazing world of fatherhood!"

Here's how Rohit Reddy made the baby announcement:

Anita Hassanandani was treated to a baby shower in Mumbai in December, which was attended by Ekta Kapoor, Karishma Tanna, Krystle D'Souza, Sanaya Irani, among others. She posted a few pictures from the baby shower and wrote: "Bout my perfect baby shower."

Anita Hassanandani And Rohit Reddy announced their pregnancy last year with an adorable Instagram post. "Getting ready for Reddy," she had captioned the video.

Anita Hassanandani married Rohit Reddy in the year 2013. She is best known for starring in popular TV shows such as Ye Hai Mohabbatein, Kabhii Sautan Kabhii Sahelii and Kkavyanjali, to name a few. She has also starred in movies like Kucch To Hai and Krishna Cottage. Anita was last seen in a brief appearance in the TV show Naagin 4. Other than TV shows, the actress has also worked in several Telugu, Kannada and Hindi films such as Sreeram, Veera Kannadiga, Aadanthe Ado Type, Yeh Dil and Hero.