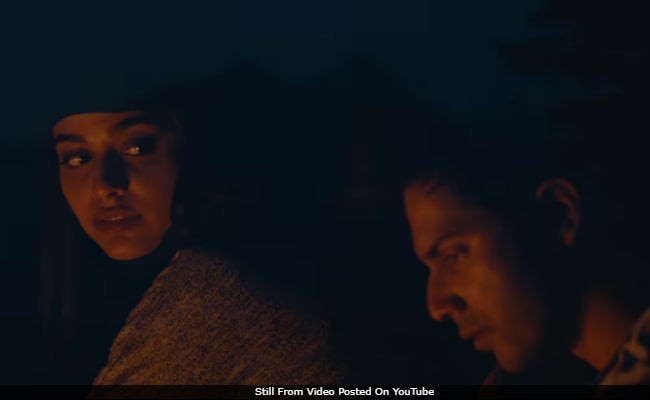 New Delhi: "Presenting a track that depicts the heart ache that comes with true love," is how Varun Dhawan introduced Tab Bhi Tu song from his new film October. Tab Bhi Tu is the second song from the film and portrays Varun and her co-star Banita Sandhu's love story, which looks complicated. Tab Bhi Tu leaves us with many unanswered questions about Varun and Banita's relationship in the film, just like the trailer and Thehar Jaa song. In the three-minute video, both the actors hardly come across each other. Tab Bhi Tu is sung by Rahat Fateh Ali Khan and composed by Anupam Roy while the lyrics courtesy goes to Tanveer Ghazi.

Varun took a short break from the shoot of Sui Dhaaga to launch Tab Bhi Tu in New Delhi.

Here's Thehar Jaa song (in case you missed watching it).

Of October, Varun Dhawan told news agency IANS, "I was the last person cast in the film after meeting Shoojit Sircar. I think casting should happen that way. Not because one actor is doing good in films. When I heard the story, I was so moved by it that I felt the need of doing the film." The actor also added that he was 'amazed to see his own performance in the film.'

October is directed by Shoojit Sircar and will be Varun's first release of this year. It is Banita Sandhu's debut Bollywood film. She had previously worked with Mr Sircar in advertisements.

Promoted
Listen to the latest songs, only on JioSaavn.com
October releases on April 13.