No, Rekha And Sanjay Dutt Aren't Married. This Rumour Is 'Wrong' 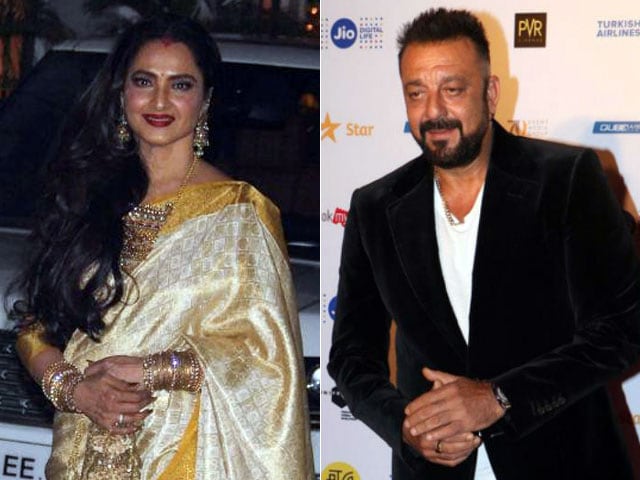 Rekha and Sanjay Dutt worked together in Zameen Aasmaan

New Delhi: No, veteran actor Rekha is not married to Sanjay Dutt. Rekha's personal life continues to be Internet's favourite topic. News that 62-year-old actress is married to actor Sanjay Dutt and applies sindoor in his name, swiftly went viral on Sunday. Earlier in the day, many reports claimed that Rekha is married to Sanjay Dutt and referred her autobiography, Rekha - The Untold Story, as the source of the news. However, the writer of Rekha - The Untold Story, Yasser Usman denied the news and in an interview to Hindustan Times, he said, "This is wrong. Nothing of this sort has been mentioned in my book. People don't read properly."

Narrating the incident quoted in the book, Mr Usman told Hindustan Times, "Rekha and Sanjay Dutt were working in a film together, probably Zameen Aasmaan (1984). The rumours of their affair surfaced at that time. In fact, some went on to say that they got married. These rumours became so strong that Sanjay Dutt had to deny the allegations in a magazine. It was an official denial."

Promoted
Listen to the latest songs, only on JioSaavn.com
He further added that since Sanjay Dutt had to deny the reports officially, the news had then become big and he categorically said that there was "no marriage." He told Hindustan Times, "One fine day, out of the blue, came the news of her marriage with Sanjay Dutt. An unfair rumour, because she was sincerely helping him recover from a rough patch. And the release of their film, Zameen Aasman, gained from the rumour. Sanjay Dutt had to actually issue a formal denial of their rumoured marriage."

The autobiography, Rekha- The Untold Story, talks about Rekha's journey from so far in Bollywood and how she as became one of the most-celebrated stars of the industry.