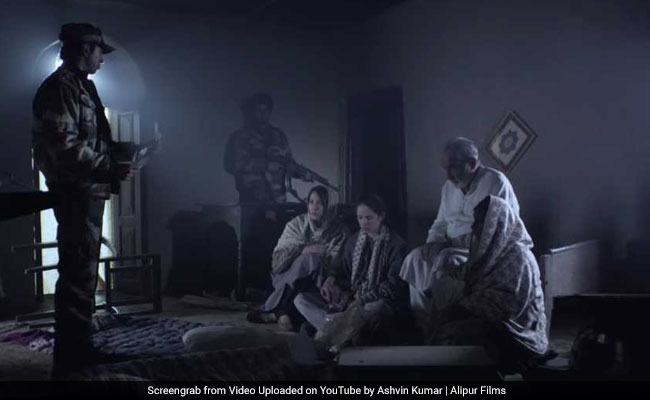 A still from No Fathers In Kashmir. (Image courtesy: YouTube)

Ashvin Kumar, who released No Fathers In Kashmir after struggling for months with the Central Board Of Film Certification or the CBFC, said in a statement that the film body 'mutilated' his film 'without either logic or legal justification.' The National Award-winning filmmaker said: "After eight months of waiting, I must admit I was totally mentally, physically and emotionally exhausted. Having made us spend sleepless nights and run from hearing to hearing for nine months they went about mutilating the film without either logic or legal justification. I have not yet seen my film in the theatre because I am deeply disheartened by what remains. It took the censors seven screenings and six hearings to slash, mutilate and compromise this labour of love."

Recently, Ashvin Kumar released a video on YouTube, which comprises scenes from the film that were omitted from the final cut. The filmmaker explained: "The first caption the censors made me place in front of the film says, 'This film is inspired by the pervading militancy and terrorism in Kashmir.' It is the most bizarre statement and I would never make a statement like that. It goes against the last 10 years of work that I have done in the Kashmir valley... Kashmir is in a crisis of compassion. If we are to be compassionate to our fellow citizen in Kashmir, we have to start telling the truth."

He added: "Censorship only produces hate, hostility, suspicion and fear in society. I just want to say that it is not films that create fear, it is censorship that creates fear."

No Fathers In Kashmir is the story of two teenagers in Kashmir searching for their fathers after they were "picked up" by the Indian Army. The film features Zara Webb, Shivam Raina, Kulbhushan Kharbanda and Soni Razdan.