Nayanthara Is "Beautiful Inside Out," Says Husband Vignesh Shivan In Wedding Documentary Teaser

The teaser of the documentary titled Nayanthara: Beyond the Fairytale shows the couple talking about finding love and much more. 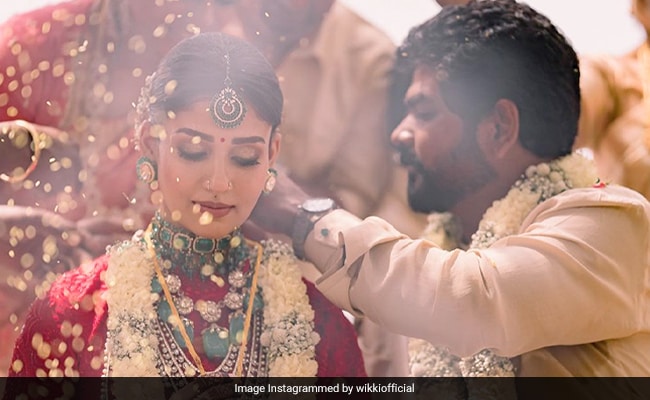 It is no overstatement to say that south actress Nayanthara and filmmaker Vignesh Shivan's love story is all things magical. The couple met on the sets of the 2015 film Naanum Rowdy Dhaan, where Vignesh directed Nayanthara for the lead role, and fell in love soon after that. After dating for more than six years, they got married in a beautiful and intimate wedding ceremony at a resort in Mahabalipuram on June 9. Ever since Nayanthara and Vignesh's big day, pictures and videos from their wedding festivities have been the Internet's favourite. And why not? The couple make their fans believe in love all over again.

Now, fans of Nayanthara and Vignesh Shivan will get to witness their dreamy wedding on an OTT platform. Netflix, on Tuesday, shared the first glimpse of the duo's wedding documentary, which depicts their journeys of finding companions in each other.

The teaser of the documentary titled Nayanthara: Beyond the Fairytaleshows the couple talking about finding love and much more. It starts with a clip of Nayanthara from her wedding day and goes on to show her saying, “I only believe in working. Definitely nice to know that you have so much love around.”

The caption of the teaser shared by Netflix read: “A magical documentary about the journey of the Lady Superstar Nayanthara. Nayanthara: Beyond the Fairytale is coming soon to Netflix and we can't wait to witness the magic.”

As soon as the teaser was dropped on social media, fans went gaga. They “can't wait” to see the whole documentary on Netflix soon.

Soon after their wedding on July 9, Vignesh dropped the first pictures from their big day on social media and wrote: “On a scale of 10…She's Nayan and I am the one. By God's Grace, just married Nayanthara.” Nayanthara opted for a handcrafted blood red saree while Vignesh went for a traditional ivory kurta and veshti from the shelves of JADE.

Netflix officially announced the documentary on July 21. It has been directed by Gautham Vasudev Menon and produced by Vignesh's Rowdy Pictures.