"A lady who showed courage against all odds being in a conservative family from a small village-My Mother," tweeted Nawazuddin Siddiqui 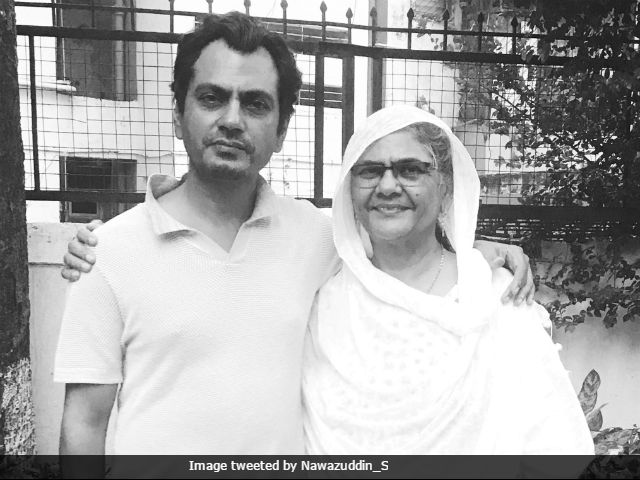 New Delhi: Actor Nawazuddin Siddiqui, who is elated that his mother Mehroonisa Siddiqui has been named as one of the most influential women in India by the BBC, shared his happiness on Twitter by posting a photograph featuring him with his mother. The mother-son duo can be seen embracing each other in the picture posted by the 43-year-old actor. "A lady who showed courage against all odds being in a conservative family from a small village-My Mother," wrote the Manjhi - The Mountain Man actor. Indian women's cricket team captain Mithali Raj, Dr. Urvashi Sahni, who is a social entrepreneur, women's rights activist and educationist and Nitya Thummalachetty, who is a business analyst at CareCentra, a health care analytics company in New York also feature in BBC's 100 most influential women list of 2017.

A Lady who showed courage against all odds being in a conservative Family from a small village-My Mother #100MostInfluentialWomenInTheWorldpic.twitter.com/rtE9VnEP74

This year the women will participate in a '100 Women Challenge' and they will be divided into teams, where they will share their stories of the glass ceiling, female illiteracy, street harassment and sexism in sport. Women with experience or special interest will be working together in different cities over the course of the weeks. They will make an innovation that would aim to help those affected by these problems.

Nawazuddin Siddiqui made his Bollywood debut in 1999 with a small role in Aamir Khan's Sarfarosh. He gained popularity after he featured as a journalist in Anusha Rizvi's Peepli Live (2012).

Nawazuddin Siddiqui has featured in successful films like Kahaani, Gangs of Wasseypur, Talaash, Bajrangi Bhaijaan, Manjhi - The Mountain Man and Haraamkhor, for which he won the Best Actor award at the New York Indian Film Festival.

Promoted
Listen to the latest songs, only on JioSaavn.com
In 2012, Nawazuddin Siddiqui received the Special Jury Award at the National Film Awards.

Nawazuddin Siddiqui last featured in the short film Carbon, co-starring Jackky Bhagnani and Prachi Desai. He will next feature in Nandita Das' Manto. The film is scheduled for release in December this year.