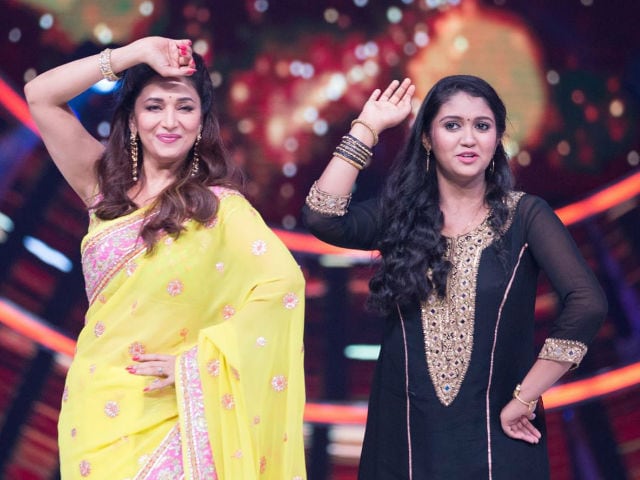 Sairat actress Rinku on the sets of So You Think You Can Dance with Madhuri Dixit.

Mumbai: Rinku Rajguru, who has gained nationwide fame for her portrayal of Archi, the female lead in blockbuster Sairat, on Wednesday attended her school, Akluj, in Solapur district, along with her Class X friends.

Rinku has been away from Akluj since the film released to a rousing reception, attending promotional and celebration events and appearing on popular TV shows.

Sairat became the highest grossing film in Marathi cinema history and is close to the landmark Rs 100-crore mark.

When she was in Akluj on June 12 for a felicitation event, her fans who gathered in thousands at the venue, made it impossible for her to get out of the vehicle.

Rinku, who has become a household name in Maharashtra after the grand success of the movie, failed to make it to the school on the first day of the new academic year. Her classmates, who had planned a grand welcome, were sorely disappointed as Rinku did not turn up at that time.

Rinku scored 81 per cent marks in her Class IX exam. A day after she received the Special Mention Jury Award at the 63rd National Film Awards, Rinku had calmly appeared for her Class IX exam in her school Jijamata Kanya Prashala.

Her classmates say that she has become inaccessible after the success of her film. School Principal Manjushree Jain said they were expecting Rinku to join on the opening day. "But she failed to make an appearance on the opening day," she said.