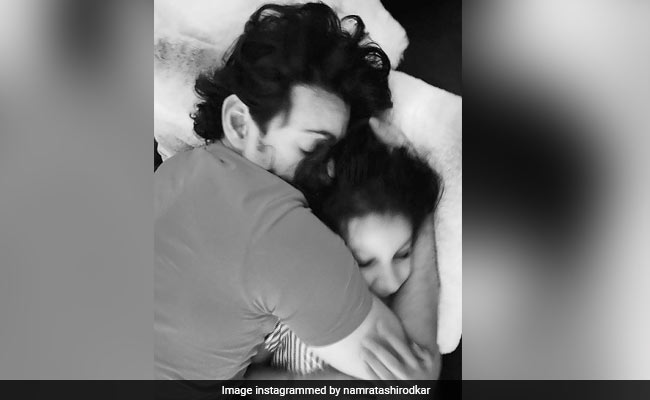 The Mahesh Babu-Namrata Shirodkar household is one that is filled with love, laughter and lots of cuddles. How do we know this? Well, the former actress herself attested to this, in her latest Instagram post that features her husband and daughter. The duo is setting some serious dad-daughter goals in the photo that shows them cuddling and this is the norm at home, Namrata confirmed in the caption. The doting father may be finding it a little tougher to let go this time around as schools are set to reopen soon, Namrata said in the heartwarming note.

Namrata wrote, "Cuddles come unwarranted! Anytime!! anyplace !! With schools about to start these are all we are gonna get any time soon !! And MB is just about realising it." While the photo left us feeling like a puddle of mush, the Tollywood superstar's fans, too, seem to have loved his affectionate father avatar.

Namrata's sister, actress Shilpa Shirodkar summed up what everyone was feeling by dropping a bunch of heart emojis in the comment section. "This is the perfect photo," another fan said.

Mahesh and daughter Sitara seem to share a very special bond and this is evident from the several pictures that Namrata has shared of the family. In another photo shared a week ago, Sitara is seen cuddling on her father's lap and Namrata said in the caption that this was a daily ritual. "Cuddles early mornings is a must !! We can't wake up otherwise..." she wrote in the caption.

Recently, Namrata also spoke for all the parents in the world when she reflected on how quickly children grow up. Sharing a photo of daughter Sitara in her arms and son Gautham by her side, she wrote, "Hold on to the tiny moments.. they grow up so fast," and tagged the two.

Sharing another throwback photo with Mahesh and the two kids, she wrote, "Turning back the clock !! Rewind mode on… need all those days back and how!"

Take a look at some of their other family photos.

Namrata followed up her Miss India win in 1993 with a career in films. She married Mahesh Babu in 2005 after dating for over five years. The two worked together in the Telugu film Vamsi. Mahesh Babu was last seen in the film Sarileru Neekevvaru.