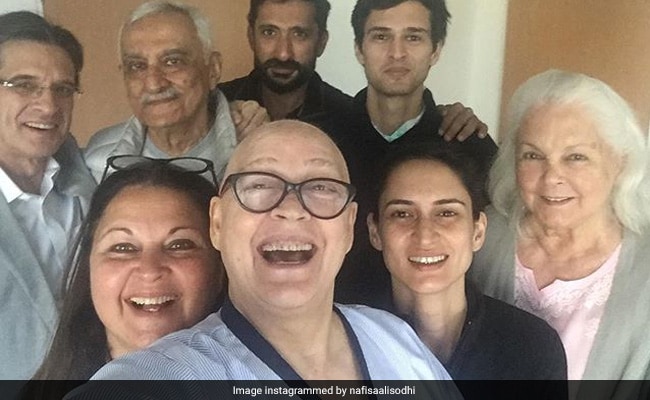 Nafisa Ali at the hospital with her family (Image courtesy nafisaalisodhi)

Veteran actress Nafisa Ali, who had revealed in her post recently that she will be undergoing a surgery on Friday, shared photos on her Instagram timeline with her family and friends from the hospital today. Nafisa Ali, who had revealed she was diagnosed with peritoneal and ovarian cancer in November last year, is admitted at a hospital in New Delhi where she will undergo the surgery. Sharing a photo of herself with her husband, children and her mother, Nafisa Ali wrote: "Off for my operation with my family gang." Another picture shared by the veteran actress features herself with her childhood friend and surgeon Darius Ankelsaria. "My amazing doctor-surgeon and childhood friend Darius Ankelsaria will be present for my surgery," she wrote.

Off for my operation with my family gang

With the 'magical' Dr Harit Chaturvedi just before my surgery

My amazing Doctor -surgon and childhood friend Darius Ankelsaria will be present for my surgery .Dr.Harit Chaturvedi @Max Delhi

Earlier, Nafisa Ali had shared a photo of herself with her family on Instagram wherein she had revealed that she is getting admitted to the hospital on Thursday for her surgery. Sharing a photo of herself from the lunch date with her children Pia, Armana and Ajit, husband Colonel R S Sodhi and her mother, she wrote: "Lunch with my family on a beautiful day. Tomorrow I get admitted for my surgery on 8th February, 2019."

Lunch with my family on a beautiful day .... tomorrow I get admitted for my surgery on 8th February'19 .

A former beauty queen, Nafisa Ali is known for her roles in films such as Junoon, Major Saab, Bewafaa , Life In A... Metro and Yamla Pagla Deewana. She was last seen in Saheb Biwi Aur Gangster 3.