Mukkabaaz Movie Review: Vineet's compelling performance makes him a character to root for and his triumphs feel earned, they feel good. 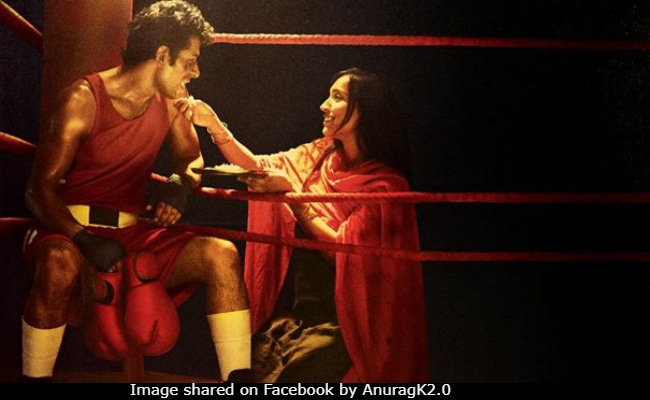 There is nothing I love more in boxing than the feint. The act of throwing half a punch - the very beginning of the blow, to be precise - in order to bluff and misdirect your opponent, making them bob the wrong way before you hook them right, is elegantly artful. Mukkabaaz does this devastatingly well. As a viewer, it is enormously thrilling when a film threatens or promises to go in one direction, prepares you for it, and heads surprisingly, joyously in another. This is not the film you might expect.

The film opens with a lynching. Worse, it opens with a lynching that is being recorded on a cameraphone, as Muslim cow-traders are beaten and exhorted to say 'Jai Shri Ram.' This is horrific, but the two boxers watching the clip later are merely bemused. They identify the goons as fellow fighters, and, walking past one of them, tease him as he cursorily denies the accusations. Their tone is not of admonition and accusation but of jovial jeering, as if a rascal was caught doing something playful. This is what it means to them. These are the boxers of Bareilly, and our hero Shravan Kumar is the best of the lot.

Thus does director Anurag Kashyap double-load the film right from the start, giving us a hero to love - soft-eyed and sincere and spry - while making him worship a rapist like Mike Tyson. Kashyap is at his absolute best in Mukkabaaz, all heart and heartland, a movie made with a vintage filmi sensibility but highly modern skills. And a story that bleeds. The love is pulpy and the revenge served up with masala, and that treatment takes this vital narrative farther.

Our boxer rebels, you see. One sunny day he steps up against his dictatorial boxing overlord, a coach who makes his students carry grain and clean mutton, and socks him in the face. This is not because of righteous indignation - though he claims it is - but because a girl in the coach's house has arrested his attention and he wants, desperately, to make an impression. He is thrashed, soundly, by several, but he has played his card. He wants nothing more than to be her hero.

She, too, wants a hero. Appropriately named Sunaina - the one with lovely eyes - she is a mute girl who speaks volumes with her giant, limpid eyes, and they gleam as she tries to convince her mother that this boxer is a good idea. The mother has several objections, but she brushes them aside as she imitates Ranveer Singh's dandruffy Tattar-Tattar dance step to say that Shravan looks at her the way Singh looks at... Looks at who, her mother asks? Sign language is forsaken now as she moves her mouth enthusiastically, with an Indian heroine needing no more than a couple of syllables for complete recognition: Dee-pi-ka.

These lovers are, naturally, star-crossed. He is a boxer with little hope of a fighting future especially after his impulsively-conceived act of defiance, and Sunaina is not just a Brahmin but the niece to the man Shravan punched. There are massive complications, but Kashyap tackles them with a superbly light touch, throwing in crowdpleasing lines and lyrics as well as an overall front-bencher approach that genuinely made me whistle. This doesn't come at the cost of the film's politics. Pricklier and slyer than the director has been in the past, Mukkabaaz reaches its dark centre with a scene where neighbours come over and offer what they call mutton to a Dalit coach before there is a power outage. The cow-mob erupts all over the boxers who didn't know better.

The film has four cinematographers - Rajeev Ravi, Shanker Raman, Jay Patel, Jayesh Nair - and I assume a couple of them were responsible exclusively for the in-ring action, which looks fantastically credible as well as mud-coated and earthy. There is a terrific tracking shot in the beginning, which follows Shravan as he enters the feudal coach's home, and delivers the grain before looking up and the shot breaks only when he looks up to see Sunaina. It's a fine looking film, bright and vivid yet shadowy when it needs to be, and the music by Nucleya and Rachita Arora gives it vitality, with some lyrics penned by co-screenwriter Vineet Kumar Singh, who also happens to play Shravan.

His is a tremendous performance, not least because of his staggeringly authentic physicality. Singh looks the part, from the way his t-shirt sleeve cuts into his biceps like tightly tied twine to the agility with which he skips in the ring, and his arduous workouts immediately put glossier Hindi film heroes in their place. He makes Shravan real, when he's throwing punches as well as when he's vulnerable. Singh has always been impressive, but this is the kind of breakout performance that will make the country take notice. It's a knockout. This is a long film, and contains interludes that aren't strictly necessary - like that of a sadistic boss - but Vineet's compelling performance makes him a character to root for, and even if we are shown the odds too many times, his triumphs feel earned, they feel good. They feel like our triumphs.

He is also a thickheaded hero, one who beats people up and apologises to them, repeatedly, and the way he looks at his heroine is with reined-in desire, expressing his interest with apologetic eyes, as if he doesn't dare expect reciprocation.

It isn't hard to see why he would be smitten. The girl's hands move faster than his own, while furiously expressing herself via sign-language, sure, but also when she slaps him, which she does hard and with impunity, whenever she needs to make a point. Zoya Hussain is great in an excessively demanding part, mute but loud as can be, the feistiest heroine we've had in a while.

Ravi Kishan blew me away with his role as a sincere Dalit coach, one who grew up idolising Pele, wasn't allowed to box, but is an athlete and sits bolt upright, even when being insulted.

I have intentionally refrained from speaking much about the film's villain, Bhagwan - the coach named God - but Jimmy Shergill, bloodshot eyes and menacing rage, is incredible. Scary good, as they say. Why he is scary is something you should discover, though there is one particularly stunning scene where he pees into a bottle and tells Shravan to drink it, calling his own urine nectar. "It'll give you life again," he says icily, not even looking at Shravan, and Kashyap abruptly and masterfully cuts away from the scene.

Promoted
Listen to the latest songs, only on JioSaavn.com
The director ends the film by saying 'Bhaarat Mata Ki Jai,' and those words coming from an envelope-pushing filmmaker express, on the one hand, genuine love for the land that gives him stories and characters and language, and, at the same time, bitter sarcasm for a government that mistreats its people and threatens storytelling. This is a country that needs not merely the best but the most ambitious, the most willing, the most reckless.

To hell with champions. Sometimes we need a raging fool.