Mowgli: Freida Pinto Reveals Why She Called And Asked For A Role In The Netflix Film

"It was not the other way round where I got the offer. I kind of called them to make the offer," said Freida Pinto 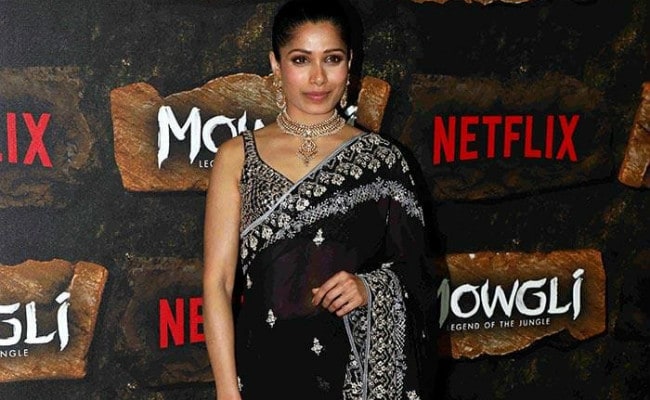 Actor Freida Pinto has fond memories of Sundays spent in front of the television watching the animation series on The Jungle Book with her family. This is why when she got to know that Andy Serkis, her co-star from Planet Of The Apes, was working on the story, she picked up the phone and asked him for a role, any role.

"I wanted to be a part of this film. It was not the other way round where I got the offer. I kind of called them to make the offer. It had to do with the childhood memory and how connected I felt to the story," she told PTI in an interview.

"I remember the joy and the thrill I would feel on a Sunday to go back home after Sunday school. I remember so well my sister and I just sitting on the couch waiting for the next episode and my dad would bring these snacks from this local bakery in Malad. That's probably my favourite childhood memory," Ms Pinto added.

The actor plays the role of Messua, who adopts Mowgli after he re-joins the human world, a role she describes is like 'jaadoo ki jhappi' for the child torn between being a human and a wolf.

"I kind of feel if I have to describe my character I'm one big giant hug for Mowgli in the movie. A hug that he's never got from anybody, so I get to be that special person in his life who makes him feel like he's loved and cared for and that he can heal," she said.

Freida Pinto said all the performance capture roles were already cast except for Cate Blanchett (Indian rock python Kaa) and Naomie Harris (Mowgli's wolf mother Nisha) was the only other female character.

"You know you would not want to play Kaa because she requires this majestic voice and my voice is thinner compared to hers. You need a fuller voice for Kaa."

"I said, 'Okay, there aren't any more performance capture roles left but I will do anything to be in this movie. I'll do like a one-second role just because I wanted to honour my childhood memories but I had actually something even better than a one second role," she added.

Freida Pinto, who shot to international fame with her role in 2008 film Slumdog Millionaire, says things have changed a lot in the past one decade because stories are acting like a bridge between India and the West.

"What is beautiful that I'm seeing now is that it's not really so much about the bridge with artistes, it's the bridge with stories. I think it's the stories that are now connecting the two worlds.

"People are more interested in knowing what's happening in India with Sacred Games or what other stories can come from here that can translate to the rest of the world and not just America. Whereas before, Indian movies were just made for India, Indian TV series was just made for India and probably a little bit of Middle East and Morocco but not for the globe," she said.

The film has been dubbed in Hindi by Abhishek Bachchan, Anil Kapoor, Jackie Shroff, Madhuri Dixit and Kareena Kapoor.