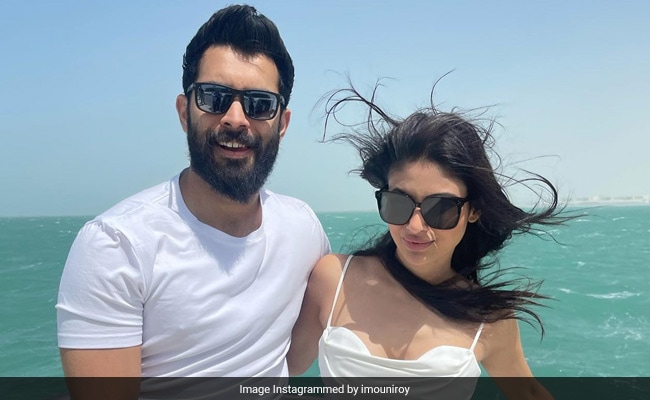 TV star wished her husband Suraj Nambiar on his birthday by sharing some stunning pictures from their getaway. Mouni added a caption along with the mushy pictures that read: "Happy birthday, the shining star of my life and the giver of best cuddles and kisses in the world...I can't wait to spend an eternity tog... My err'ything, the best part of me.. Am just the luckiest to have wished you into my reality." In the comments section, Suraj Nambiar commented: "My wifey bestest." The couple got married in Goa in January this year. They had two ceremonies. Mouni Roy's friends and family attended the wedding.

Mouni Roy often shares mushy pictures with her husband on Instagram. Sharing this picture-perfect shot, the actress wrote: "A few hours and I miss you already..."

Here are some more pictures of the couple:

"Snacking on some sun with the Mr," Mouni captioned this one.

Mouni Roy, a popular face in the Indian television industry, has been a part of several shows such as Kasturi, Devon Ke Dev...Mahadev and Naagin, to name a few. She has also participated in reality shows like Nach Baliye 6, Jhalak Dikhhla Jaa 7 and Zara Nachke Dikha. She has been a part of films like Gold and Made In China.

The actress will next be seen in Ayan Mukerji's Brahmastra, where she plays the antagonist. The film stars Ranbir Kapoor, Alia Bhatt, Amitabh Bachchan and Nagarjuna. The first part of the fantasy trilogy is slated to release in September this year.

Watch: Hina Khan Has The Funniest Take On Heartbreak