Monica, O My Darling Review: Rajkummar Rao is never off the boil. Huma Qureshi fleshes out Monica in all her splendour. Radhika Apte takes to the role of a chatty policewoman. 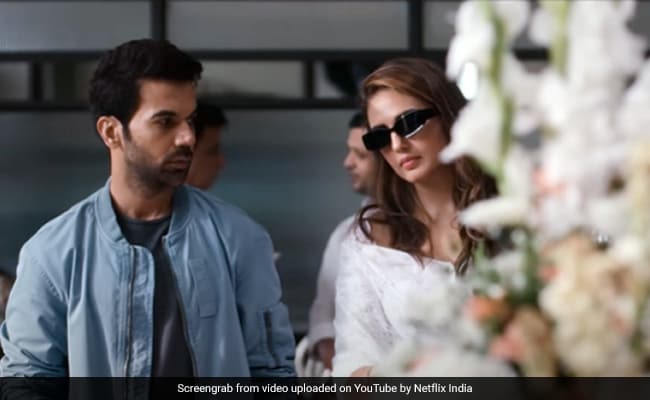 A still from Monica, O My Darling trailer. (courtesy: Netflix)

Cups of tea have never been as portentous as they are in a sequence that plays out about an hour into in Monica, O My Darling. The eponymous character - a CEO's secretary - makes the chai for her boss and the company's chief tech developer. The latter baulks. He fears a deadly slip between the cup and the lip.

Director Vasan Bala and screenwriter Yogesh Chandekar inform this stray moment with a delicious mix of wit, wickedness and whimsicality that defines the neo-noir comic thriller as a whole. Full of knowing winks thrown the audience's way, Netflix's Monica, O My Darling, is a wildly entertaining film packed with twists and turns that keep on giving until the final fadeout.

It is delightfully tricksy, transfixing concoction that probes the goings-on in a Pune-based company, a veritable viper's pit where nothing is what it seems. The film taps the nuts and bolts of the genre and other necessary tools to produce a movie experience that, sometimes playfully and sometimes with a sudden grab at the scruff of the neck, pushes the audience into the innards of a moral black hole where people caught in a bind continually draw upon their wiles but find no way out.

Behind the manipulations and manic measures that the warped minds resort to, a privileged lot battle it out with the not-so-privileged who not only seek their pound of flesh but also figure out ways to get it.

Rajkummar Rao plays robotics expert Jayant Arkhedkar, a small-town lad who has wormed his way into the corporate charmed circle. Branded a pretender and a parasite by a rival within the company, he is drawn into a fiendish conspiracy that can only spell trouble. Determined not to have the rug pulled from under his feet, he sinks deeper and deeper into a dark rabbit hole.

Huma Qureshi is Monica Machado, the top honcho's secretary, a femme fatale who employs her guiles to hold her ground on a slippery slope. And Radhika Apte, given an "and above all" billing a la Pran in Hindi movies of another era, is ACP Naidu, wisecracks her way through the grind of policing.

Out here, the line separating the acceptable from the dubious is thin, nay non-existent. While those in the top echelons of the Unicorn Group of Companies fight to protect the cushy turf they believe they have deservedly earned for keeps, the "invisible people" - the male protagonist is acutely conscious of what it means to be one of them - chip away at the edges of an impenetrable power structure and look for a way in.

In this unseemly war, all is fair and there is little scope for love, not even between brother and sister. There are two sets of them in Monica, O My Darling. The CEO's slimy son Nishikant (Sikandar Kher) and his daughter Nikki (Akansha Ranjan Kapoor) make no bones about their hostility towards each other. Jay and his younger sibling Shalu (Zayn Marie Khan), also a Unicorn employee, are not exactly at daggers drawn but one is wary of the other at the best of times.

Aided by a terrific screenplay and a tremendous cast of actors, Vasan Bala assembles all that a twisted thriller should ideally have and then adds his own singular flourishes in the form of wonderfully organic, homegrown elements fuelled by an unbridled love for popular cinema and a sensibility that can turn familiar into fresh with minimum fuss.

Monica, O My Darling is a rare treat in the context of Bollywood, which does not have a genuine film noir tradition. Is this film as good as Ek Hasina Thi and Johnny Gaddar, the first two entries in the oeuvre of Sriram Raghavan, a writer-director to whom Vasan Bala acknowledges a debt upfront? The answer is yes.

Venomous cobras and lethal robotics have significant roles in Monica, O My Darling. That is hardly surprising considering what the film is seeking to project - humans that are as hazardous as reptiles and as machine-like as robots.

Monica, O My Darling begins with a prelude in which a murder is committed by a jealous lover (Sukant Goel) who takes manual control of a robot in Unicorn's tech lab and eliminates a co-worker who reveals his desire to marry Shalu. The casualty is blamed on an accident. Safety officer Faridi Baig (Faisal Rashid) takes the fall and loses his job.

The audience is aware of the identity of the man behind the machine, but none of the characters in the film has any way of knowing. How, six months on, they discover the many layers of truth, falsehood and subterfuge that begin to unravel as the company is rocked by a series of murders.

Jay has the ears of the ageing CEO Satyanarayan Adhikari (Vijay Kenkre). He also happens to be the boyfriend of the latter's daughter Nikki even as he has a fling with Monica. As things turn messier by the day, Jay faces the danger of being knocked off his pre-eminent perch.

This gentleman from the fictional village of Angola (it certainly isn't the central African country) is appointed to the board of directors and given a share in the company's profits. The move puts him in the crosshairs of his top management colleagues - the boss' disgruntled son, the CFO Arvind Manivannan (Bagavathi Perumal) and Tamang Rana (Shiva Rindani).

The biggest trouble for Jay comes via a pregnant Monica. Blackmail, a complicated murder plot and a well-laid plan gone awry lead to a series of deaths. Neither the audience nor the characters know if these murders are connected with each other or with the one at the start of the film.

The reveals are scattered across the entire film. Even when it is indicated who might be responsible for the rising body count, the guessing game and the surprises do not stop. In fact, the more the film discloses, the more steam it gathers. Nothing that is discovered or divulged as the plot unfolds is bathed in bright, clear daylight. Doubts persist even when the crucial cards appear to be on the table.

Cinephilia is the binding agent in Monica, O My Darling. Beginning with the Asha Bhosle song from 1971's Caravan that gives it its titles, the film makes many hat-tips to a wide spectrum of movie lore - from Bates Motel to Captain Zattack, a character in 1991's Hum played by an actor who is part of the supporting cast here.

Vasan Bala extracts top-notch performances from his actors. Rajkummar Rao is never off the boil as a chameleon driven by an instinct for survival. Huma Qureshi fleshes out Monica in all her splendour, a woman who revels in twirling men around her fingers. Radhika Apte takes to the role of a chatty policewoman who is always a step ahead of the rest like a fish to water.

The smartly off-kilter Monica, O My Darling, adapted from Japanese writer Keigo Higashino's 1989 mystery novel Heart of Brutus, is an intriguing, enthralling work that deftly turns pulp into a precious cinematic pearl. In short, it is a not-to-be-missed marvel.