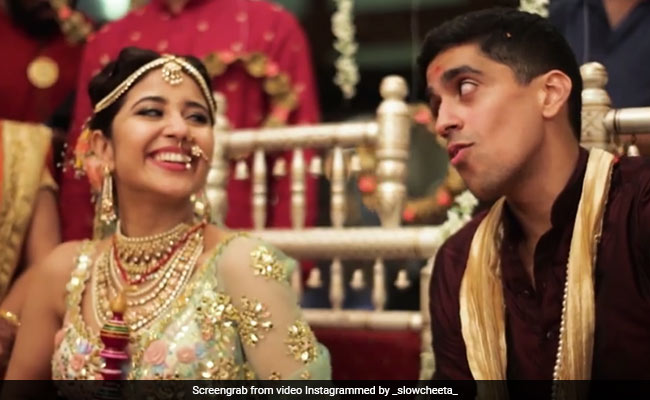 A still from the wedding video. (Image courtesy: slowcheeta)

Mirzapur actress Shweta Tripathi  and rapper Chaitanya Sharma, whose stage name is SlowCheeta, celebrated 3 years of togetherness recently. The couple shared mushy posts for each other on their respective social media profiles. Chaitanya Sharma shared a video from their wedding that took place in Goa. "When Cheeta got his Battata," he captioned the post (Shweta's Instagram moniker is Battatawada). The video has visuals from their big day and their wedding festivities. The video looks straight out of a fairytale. The couple got married in a big, fat wedding in Goa in the presence of their family members and friends. The couple first met during a stage performance in New Delhi and shared the return flight Mumbai where they fell in love. In 2018, Chaitanya proposed to Shweta on stage and she said yes.

Meanwhile, Shweta Tripathi shared a set of pictures with her husband and she captioned the post: "Happppppppy forever to us."

Shweta Triapthi, is best-known for starring in the critically-acclaimed Masaan, co-starring Vicky Kaushal and Richa Chadha. She also starred in both the seasons of Amazon Prime Video's Mirzapur, also starring Ali Fazal and Pankaj Tripathi. She also featured in films such as Haraamkhor, Gone Kesh and Cargo, opposite Vikrant Massey.

The actress also starred in Laakhon Mein Ek, Raat Akeli Hai and The Gone Game. She also featured in an episode of Amazon Prime Video's Made In Heaven. Shweta was also a part of both the seasons of the TV series The Trip.