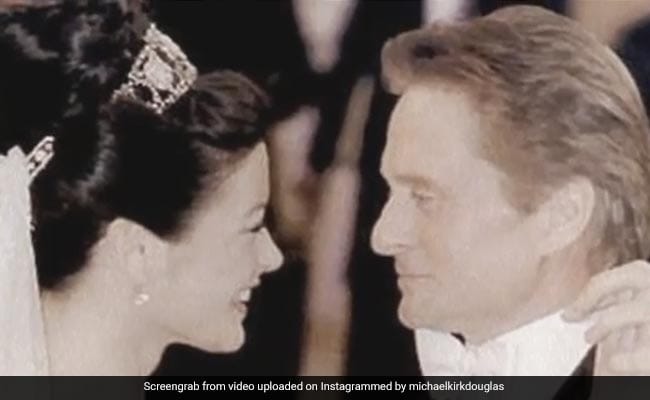 Michael Douglas and Catherine Zeta-Jones in a still from the video. (courtesy: michaelkirkdouglas)

Some couples make you want to believe in love. In Hollywood, one such couple that makes marriage look good is Michael Douglas and Catherine Zeta-Jones. It has been twenty-one years since the couple decided to spend the rest of their lives together and the journey thus far has been beautiful. And, we are not the ones saying this. We are just happily quoting what Michael Douglas said on the occasion of his  21st wedding anniversary to the lovely  Catherine Zeta-Jones. The happy husband celebrated the milestone like a millennial would; by posting the mushiest and sweetest video on Instagram. The montage clip is a collection of several pictures of the actors gazing at each other lovingly, sharing a kiss, laughing and even skiing together. Did someone say “power couple”?

The video begins with the note, “21 years! Happy anniversary,” and cuts to images from their wedding. It ends with an image of the couple cuddling on the couch with their dog and the note, “Happy Anniversary my darling Catherine! I love you so much. Love, Michael,” which also doubles as the caption. The song, Best Day Of My Life by American Authors plays in the background. We also spotted images from the couple's Indian trip in the montage video.

Both Michael Douglas and Catherine Zeta-Jones often share pictures and videos of each other on social media. Recently on the occasion of Halloween, Michael Douglas shared a photo of the couple in their costumes. Sharing the image, the actor wrote, “Who's ready for #Halloween? What are you dressing up as today? Would love to hear your costume ideas! Stay safe and have a Happy Halloween.”

Before that, Catherine Zeta-Jones too shared a throwback video of her husband and her dancing like there is no tomorrow with their family and loved ones. “Really in need of some ‘Boogie Nights' with my family. Seems like a lifetime ago that we were able to get down on the dance floor,” her caption read.

Last year on their anniversary, Catherine Zeta-Jones shared a moving video. On the occasion of their 20th anniversary, she had said, “20 years ago today Michael and I were married! What an amazing magical night that was! And 7304.85 days and nights on, I love you now as I did then. (Except for the point 85 bit). Thank you for the love and laughter.”

Catherine Zeta-Jones and Michael Douglas have two children, Carys Zeta Douglas and Dylan Michael Douglas. They have worked together in the film Traffic.

Camila Cabello And Shawn Mendes Announce Break-Up, "Will Continue To Be Best Friends"