Ayesha Tan-Jones said the clothing was a "symbol of a cruel time in medicine when mental illness was not understood." 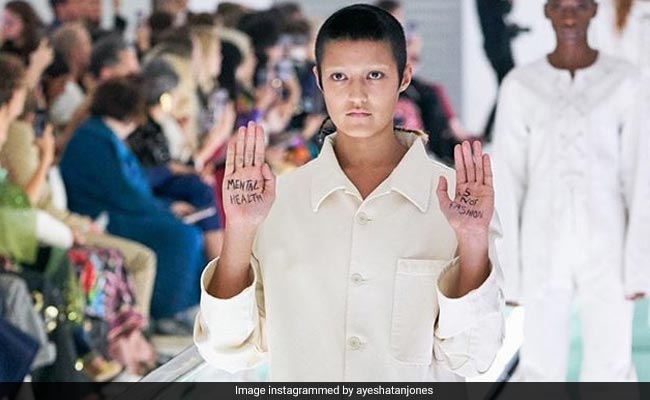 Everything was white: the walls that the Gucci models slid past, the conveyor belt they stood on, the prisonlike sandals they wore on their feet and the straitjackets that covered their unmoving bodies.

Before Gucci brought out patterns and lace and loud colors at Milan Fashion Week, the blank slate and bland clothing was meant to represent "the most extreme version of a uniform dictated by society and those who control it," according to Gucci.

Designer Alessandro Michele made the "blank-styled clothes to represent how through fashion, power is exercised over life, to eliminate self-expression," Gucci wrote on Instagram. "This power prescribes social norms, classifying and curbing identity."

During the opening of the Gucci show in Milan on Sunday afternoon, the label's 20 models, somber and staring blankly ahead, moved past onlookers with their arms limp at their sides - all but one.

Ayesha Tan-Jones - who identifies as gender-nonbinary and uses the pronouns they and them - raised their arms.

"MENTAL HEALTH," their palms read in black marker, "IS NOT FASHION."

Tan-Jones did not immediately respond to an interview request, but they said in a series of statements posted to Instagram after the fashion show that they decided to protest because "I believe, as many of my fellow models do, that the stigma around mental health must end."

As someone who has struggled with mental health, and as someone with loved ones who have experienced bipolar disorder, depression, anxiety and schizophrenia, Tan-Jones wrote that "it is hurtful and insensitive for a major fashion house such as Gucci to use this imagery as a concept for a fleeting fashion moment."

Tan-Jones continued: "Strait Jackets are a symbol of a cruel time in medicine when mental illness was not understood, and people's rights and liberties were taken away from them while they were abused and tortured in the institution."

"It is in bad taste for Gucci to use the imagery of strait jackets and outfits alluding to mental patients, while being rolled out on a conveyor belt as if a piece of factory meat.

"Presenting these struggles as props for selling clothes in today's capitalist climate is vulgar, unimaginative and offensive to the millions of people around the world affected by these issues."

Tan-Jones continued the thought in a separate statement.

"Many of the other Gucci models who were in the show felt just as strongly as I did about this depiction of straitjackets, and without their support I would not have had the courage to walk out and peacefully protest," Tan-Jones said, adding that they had joined other models in donating a portion of their show payment to mental health charities.

Representatives from Gucci did not immediately respond to a request for comment, but in their statement on Instagram after the show, they made clear that the white outfits that started the show will not be sold and were only included as part of the performative art. Those outfits, including the straitjackets, were meant to juxtapose Michele's colorful spring and summer collection, the account said, which he designed to convey "fashion as a way to allow people to walk through fields of possibilities, cultivate beauty, make diversity sacrosanct and celebrate the self in expression and identity."

Uniforms, utilitarian clothes, normative dress, including straitjackets, were included in the #GucciSS20 fashion show as the most extreme version of a uniform dictated by society and those who control it. These clothes were a statement for the fashion show and will not be sold. @alessandro_michele designed these blank-styled clothes to represent how through fashion, power is exercised over life, to eliminate self-expression. This power prescribes social norms, classifying and curbing identity. The Creative Director's antidote is seen in the Gucci Spring Summer 2020 lineup of 89 looks, he has designed a collection that conveys fashion as a way to allow people to walk through fields of possibilities, cultivate beauty, make diversity sacrosanct and celebrate the self in expression and identity. #AlessandroMichele

Michele told The New York Times after the show that he "wanted to show how society today can have the ability to confine individuality and that Gucci can be the antidote."

"For me, the show was the journey from conformity to freedom and creativity," Michele told The Times.

Michele, an Italian designer who became Gucci's creative director in 2015, has faced criticism in the past for other "make it fashion" moments that were characterized as insensitive.

In February, Gucci issued an apology and pulled a wool balaclava jumper that retailed for $890 from its shelves after online critics accused the turtleneck of miming blackface. The brand also faced backlash for putting white models in turbans as if the Sikh religious headwear and later selling them in stores for hundreds of dollars.

After those uproars, Gucci formed an advisory council and made plans to hire a global director for diversity and inclusion.