Chris Hemsworth wrote: "Not sure why everyone's so worried about Thor, he's fine guys." 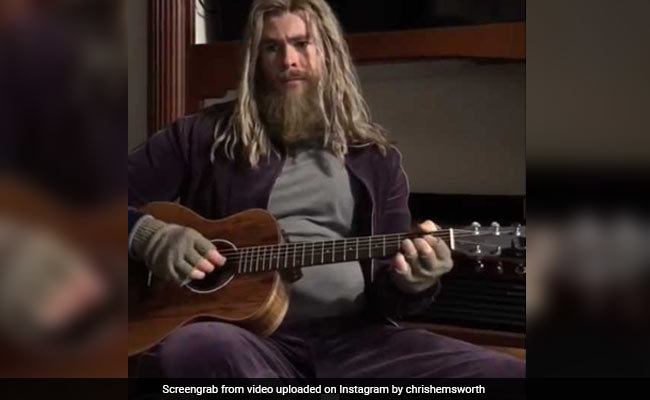 Chris Hemsworth in a still from the video he posted on Instagram. (Image courtesy: chrishemsworth)

Chris Hemsworth's new film Men In Black: International has opened in cinemas but the actor appears to be hungover (pun intended) on his Avengers: Endgame role. The actor, who played (or plays - who knows?) Thor in the Marvel Cinematic Universe, instagrammed a video of himself in character as Fat Thor, in which he covers Johnny Cash's version of Nine Inch Nails' hit Hurt. "Not sure why everyone's so worried about Thor, he's fine guys," Chris Hemsworth wrote. Fat Thor, as you probably know, was the overweight deadbeat drunk version of the Mightiest Avenger that gave Endgame life.

Chris Hemsworth's Instafam posted ROFL emoticons in the comments section and an Instagram user wrote: "Thor is lit." Chris' Avengers co-star Chris Pratt, who plays Peter Quill in the Guardians Of The Galaxy films, commented: "Hahaaaha this is genius."

Not sure why everyone's so worried about Thor, he's fine guys...

Chris Hemsworth first released the video on The Tonight Show Starring Jimmy Fallon, where he said that it was made in between takes of filming Avengers: Endgame. "I was method acting the whole time," said Chris Hemsworth. Why Hurt? Because "It's the saddest song in the world" and just what Fat Thor, depressed after his failure to stop Thanos in the previous film Avengers: Infinity War, would be in the mood for.

Chris Hemsworth, whose character Thor survives the final battle at the end of Endgame and will likely be seen in the third Guardians Of The Galaxy film, said at a press conference recently that he enjoys the "combination of comedy and action." Good for him that Men In Black: International came his way. "I enjoy doing the combination of comedy and action a lot. And in MIB, it again comes naturally. I find it hard to play characters which are straight because I find them more restricting," he was quoted as saying by news agency IANS.