Meghana has revealed the name of their baby in a nostalgic post. 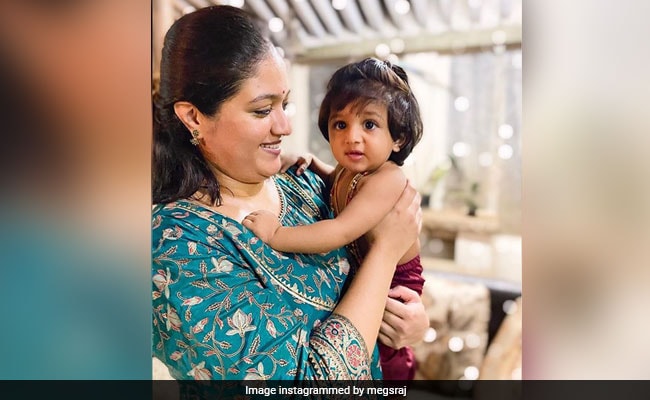 Actress Meghana Raj teaches us a thing or two about how to do revelations – the best one is through a video collage of her life's most important moments. The actress, who gave birth to her and late actor Chiranjeevi Sarja's son in October 2020, has revealed the name of their baby in a nostalgic post. Chiranjeevi Sarja died due to cardiac arrest in June, last year. On Friday, Meghana shared a heartwarming video and announced their son's name – Raayan Raj Sarja. The video features Chiranjeevi Sarja, who she referred to as “the king,” and added snippets from their wedding diaries.

The later part of the video is all about Raayan – “Our paradise,” she wrote. In the clip, we can see a pint-sized Raayan on Meghana's lap, as they pose in front of a life-like photograph of Chiranjeevi Sarja. “The name is,” she wrote. Meghana Raj's colleague from the Malayalam film industry Ahaana Krishna was the first to comment on her post. She shared a bunch of kissing emojis.

Before this, Meghana Raj had shared a video through which she announced that their “little prince now has a name.” The footage features some wonderful moments from the couple's wedding. Towards, the end, we get to see baby Raayan. As for the caption, she wrote, “Let's open the gates of paradise…Our little “Prince” now has a name…The first question I was asked regarding JrC was ‘yen hesaru Junior du'... And, now finally the King has decided a name for his Prince…”

Meghana Raj shared the first picture of her cute munchkin on Instagram, last year in December. Here we see the little one trying to hold his mom's finger. "Time of miracles. My little gift trying to wrap his tiny hands around mine. Can't thank you enough baby Ma...The best gift you have ever given me... We love you. Waiting for you."

The actress keeps sharing beautiful snippets of her time with Chiranjeevi Sarja on Instagram. Meghana Raj's send-off for her husband made us cry. “An unfathomable pain shoots through my soul every time I see the door and you don't walk in shouting Baby, I am home,” wrote Meghana, a few days after Chiranjeevi Sarja died.

Meghana Raj and Chiranjeevi Sarja got engaged in October 2017. The two got married a few months later, in May 2018.

Teachers' Day 2021: Wait, Is That Mahesh Babu In This Throwback? See His Tribute To Father Krishna