Matthew Lewis, Harry Potter's Neville Longbottom, Got Married And Twitter Was Confused For A Minute 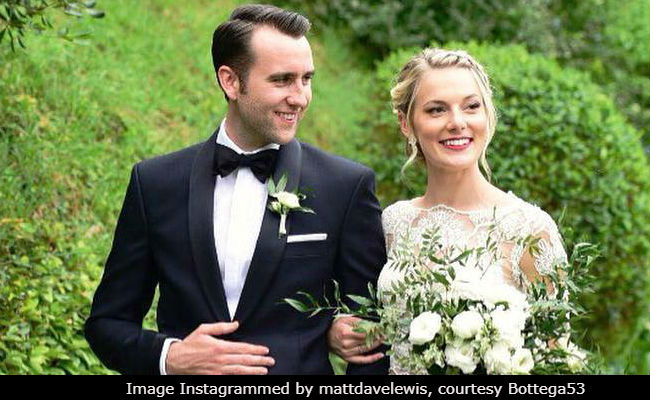 Actor Matthew David Lewis, who played the role of Neville Longbottom in eight Harry Potter films from 2001 to 2011, shared a picture from his wedding day (clicked by wedding photographers Nancy Stuppiello and Piermarco Rinaldi of Bottega53) on Instagram on Tuesday and the Internet could not stay calm. A section of the Internet thought he married the actress, who played the role of Hannah Abbott, a Hufflepuff student whom Neville marries in the Potterverse. However, Matthew married Angela Jones, an American lifestyle blogger, who never starred in any of the Harry Potter films. The actress, who played Hannah Abbott in the Harry Potter films, was Charlotte Skeoch. Sorry, Potterheads.

On Twitter, Matthew Lewis, 28, said: "Not only did I miss @ArcticMonkeys in LA but they were performing in Italy at the same time we were there and my wife made me get married instead. Fuming."

Not only did I miss @ArcticMonkeys in LA but they were performing in Italy at the same time we were there and my wife made me get married instead. Fuming. pic.twitter.com/VEZfTkizBa

Here are some reactions referencing 'Neville and Hannah':

However, Hannah or not, fans of the actor were happy for him and posted sweet congratulatory messages. "We are so proud of you Neville! 100 points for Gryffindor," wrote one Instagram user. "Congratulations, Neville Longbottom finally you got your real life Luna." (Point of reference - only in the films, Neville and Luna were romantically linked towards the end). His Harry Potter co-star Tom Felton also added a comment: "Top lad."

10000 Points to Gryffindor!!!! Conratulations are in order to Mr and Mrs Longbottom!! pic.twitter.com/VXEzHHogWK

I believe congratulations are in order! pic.twitter.com/BD5wFvxKsU

cant believe this baby is married!!!

Matthew Lewis debuted in films with Harry Potter And The Philosopher's Stone (2001). Apart from the Harry Potter films, Matthew has featured in The Sweet Shop (2013), Me Before You (2016) and Terminal, which will release in UK in July.