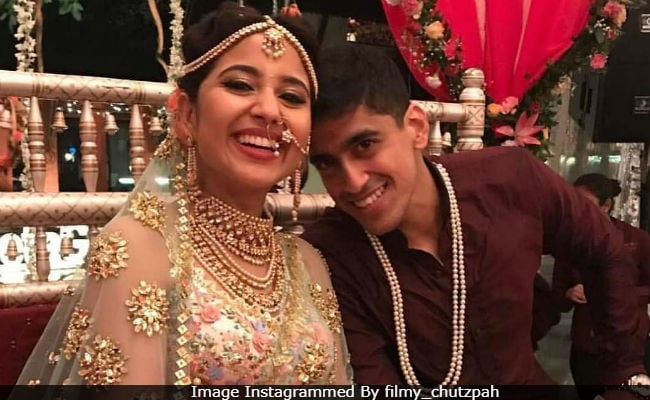 Actress Shweta Tripathi, best-known for her film Masaan, married rapper Chaitnya Sharma in Goa this evening. Shweta wore a mint and red coloured lehenga by Papa Don't Preach and she looked extremely beautiful. Shweta accentuated her bridal look with a golden maathapatti, spectacular choker and gold earrings. Chaitnya complemented his bride in a maroon kurta-pyjama set. The first pictures from their wedding are here - see below. The wedding happened as per Hindu traditions. The videos and pictures are every bit dreamy. They happily took the pheras, after which Chaitnya tied the mangalsutra around Shweta's neck. The newlyweds clearly couldn't hold their excitement.

Take a look at Shweta and Chaitnya's wedding pictures.

With My multi talented Sweetest Bride Shweta Tripathi @battatawada Bollywood Actress From Movie Masaan, Haramkhor, many more. She Will Be Soon Seen In In A Film (Cargo) In 2018). . It Was Fun To Apply Her Bridal Mehendi Which Was Unique & very Different.. Like Her . Her Bridal Mehendi Was All About Moments, Events Elements She Had Cherished With Her Actor-Rapper Boyfriend Chaitanya Sharma @_slowcheeta_ Who Will Be Seen In Bollywood Soon In Zoya Akhtar's Gully Boy, Co-Starring Ranveer Singh And Alia Bhatt. . #shwetatripathi #bridalmehndiqueen #bollywoodmehndiartist

Chaitnya Sharma, whose stage name is SlowCheetah, had proposed to Shweta for marriage some months ago and she instantly had said a 'Yes!' "He proposed at a place called Cuckoo Club, which is a performing place in Mumbai. He wanted to do it on stage because that's how we met -- for a play. He had told me he has a new play, so I went to see that... But it was the proposal," she had earlier told news agency IANS.

That's what he said- It's been 5 years now, she's been with me through thick and thin, As long as she's by my side I'll always win. We met thanks to Akarsh, Adhaar, most importantly thanks to stage, And so I thought to myself, what better place? To ask her the question that'll make sure we live the rest of our lives happily, Shweta Tripathi WILL YOU MARRY ME? And I screamed 'YES!!!' #GoCheetaGetBattata

"We met because both of us were stepping in for other actors. So, from Bombay (Mumbai), we met in Delhi to perform and hardly spoke throughout. On our way back, we were seated next to each other. It was a 5 a.m. flight, so obviously the plan was to doze off. But we started talking and that was that," Shweta added.

Promoted
Listen to the latest songs, only on JioSaavn.com
Shweta Tripathi has a web-series, titled Mirzapur, and a film (Cargo) up for release in 2018. Chaitnya Sharma will be seen in Ranveer Singh's Gully Boy.