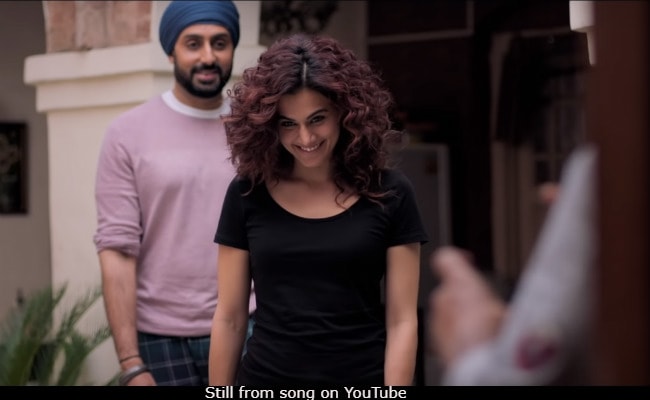 A still from the song Chonch Ladhiyaan (courtesy YouTube)

Chonch Ladhiyaan, the new song from Abhishek Bachchan and Taapsee Pannu's movie Manmarziyaan released on Wednesday and will drive away your mid-week blues. Chonch Ladhiyaan is a melodious track, which perfectly weaves the tunes of love and romance. The song is a beautiful documentation of how new bride Rumi (played by Taapsee Pannu) begins to bond with her husband Robbie (played by Abhishek Bachchan). "Pyaar karti ho mujhse?", "Ho jaega pyaar, achche to lagne lage ho aap" - the song begins with an adorable conversation between Rumi and Robbie. Sung by Harshdeep Kaur and Jazim Sharma, Chonch Ladhiyaan has the perfect flavour of a pure Punjabi dhun.

Chonch Ladhiyaan has been composed by Amit Trivedi while credit for lyrics goes to Shellee. In Chonch Ladhiyaan, Vicky Kaushal also makes an appearance but at the absolute end of the song. Manmarziyaan is the story of a love triangle, in which Rumi marries Robbie after Vicky (played by Vicky Kaushal) fails to live up to her expectations. Chonch Ladhiyaan portrays how Rumi and Robbie grew affectionate towards each other on their honeymoon.

Manmarziyaan marks Abhishek Bachchan's first movie after his two-year break from acting, about which his co-star Taapsee told PTI: "Abhishek will sometimes be sure, sometimes unsure of things but you need strength to survive all the ups and downs. Then to take a break to sort things out and return with a film like Manmarziyaan. It is not a conventional heroic film for him to do. It is very brave and he is strong as a person to do that. It requires courage."

Directed by Anurag Kashyap, Manmarziyaan is all set to hit screens on September 14.