Manisha Koirala's Vijaya Dashami Was All About Family, Love And Blessings. See Pics

Showering her fans with best wishes, Manisha Koirala wrote: "From our family to yours - Happy Dashain." 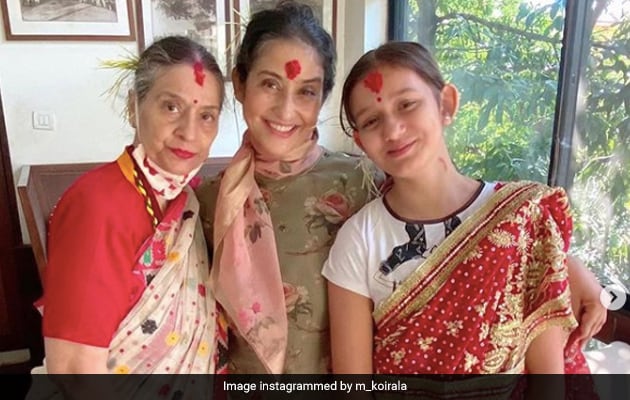 Manisha Koirala, who is from Nepal, celebrated Vijaya Dashami with her family members and her joy spilled onto Instagram. Manisha Koirala celebrated the special occasion with a puja at home and a major fam-jam, glimpses of which she shared in an Instagram album, captioned: "Vijaya Dashami celebrations." In the photos, Manisha's parents Prakash and Sushma Koirala can be seen blessing the actress and her brother Siddharth. Showering her fans with best wishes, Manisha Koirala wrote: "From our family to yours - Happy Dashain." Dashain festival, also known as Vijaya Dashami, is said to be the most auspicious festival in Nepal.

Manisha's Vijay Dashami was all about family, love and blessings:

Manisha Koirala, who was diagnosed with ovarian cancer in 2012, shared a tweet of gratitude last year, along with a photo of herself from when she was undergoing treatment. "Forever grateful for second chance to life," read her tweet. Manisha Koirala opened up about her ordeal with the cancer and emerging as a survivor in the book Healed: How Cancer Gave Me A New Life, which was published in 2018. Manisha Koirala frequently shares posts on positivity and motivation on Instagram and here are some of them.

"Look for the magic in every moment." #magicalmoments #magicalgirl #lifeisbeautiful #stayinspired 💝