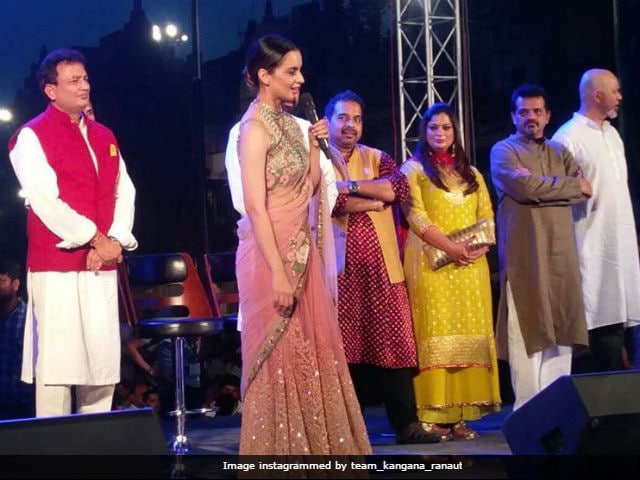 Kangana Ranaut also took dips in the Ganges after the launch. (Image Courtesy:)

New Delhi: Actress Kangana Ranaut launched a 20-ft tall poster of her upcoming film, Manikarnika: The Queen Of Jhansi, at the Dashashwamedh Ghat in Varanasi on Thursday, reports news agency PTI. Kangana, who will portray the warrior-queen Rani Laxmibai in the film, hoped that she could live up to the legacy of Rani of Jhansi. "I am so blessed to be here. With the blessings of Lord Shiva, we have launched it here (Varanasi). After coming on board for this project, I feel like I have achieved something very big in my life." The Queen actress also participated in the Ganga aarti after the launch of the poster. The film traces Rani Laxmibai's fight for independence.

Here's a look at the poster.

#Manikarnika - the queen of jhansi... pic.twitter.com/PS75FVJP0T

Team #Manikarnika all set for the grand launch in Varanasi! #KanganaRanaut

Some more pictures from today's grand launch of #Manikarnika in Varanasi! pic.twitter.com/y8gJRBjZwr

Promoted
Listen to the latest songs, only on JioSaavn.com
Rani Laxmibai, whose maiden name was Manikarnika, was born in Varanasi. Kangana feels that women can relate to the valour and dignity of Rani Laxmibai. She told PTI, "I feel that Rani of Jhansi is very relatable for women like us. Life without respect was equivalent to death for her. I think that is something I completely identified with."