Mane No 13 Review: A house of horrors that the writer-director Vivy Kathiresan and his actors have a free run of. 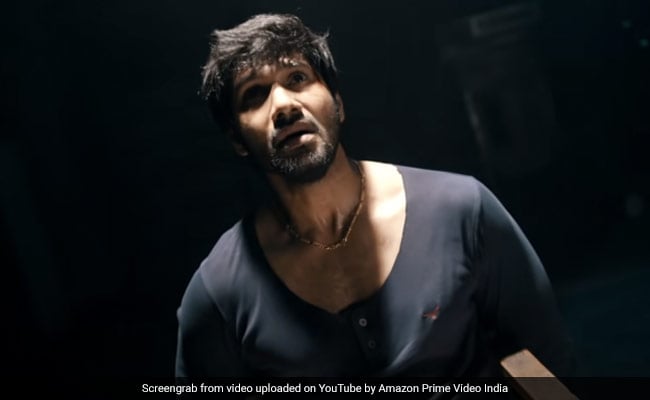 Mane No 13 Review: A still from the movie (courtesy YouTube)

A bhoot bangla on the edge of town is at the centre of the action in Mane No 13 (House No. 1), a lazily scripted, shockingly banal horror-thriller that is mystifying for the wrong reasons. Why, pray why, would anybody sink money, time and energy into a film as utterly unoriginal as this? And why on earth would a streaming platform deign this slapdash effort fit for acquisition?

The Kannada film, out on Amazon Prime, is unadulterated hogwash. It wends its way through an hour and 45 minutes hoping for a miracle to intervene and turn things around. Well, the plot does have its share of twists and turns but none of them, half-baked as they are, takes the film in the right direction.

Mane No 13 starts with a grisly, cold-blooded murder in a jungle after a boozy college bash. It then totes up a high body count and sheds a river of blood for the purpose of generating nausea. It is revulsive all right but to no constructive end. The film winds up more or less the way it begins - in a complete haze. You are none the wiser at the end of it because there isn't anybody left standing to answer the many questions that pop up in your head.

While the storyline is silly enough, the structure is worse. For one, the ghastly prelude holds nothing back. Then, before a crucial change of scene two years after the aforementioned event, Mane No 13 weaves a scary story about the house that the protagonists are about to move into. Out the window goes any possibility of the film stringing together moments of genuine suspense.

Mane No 13 is indeed a house of horrors that the writer-director Vivy Kathiresan and his actors have a free run of. They think nothing of wallowing in the chaos that they unleash. The film homes in on the tics of the conventional horror genre in a manner that is not only hackneyed, but also appallingly inane.

The five protagonists, IT professionals who work in the same organisation and share an accommodation, behave like a bunch of pesky school children on an unsupervised day trip to a park. When daylight gives way to darkness, they run completely amok. The inseparable roomies, three boys and two girls, turn into absolute abominations who not only get in each other's ways, but also prevent the film from turning into even a passably spooky affair.

In the process of having too much fun for their own good, they rile their landlord. One fine morning they are served notice to vacate. They shift to a dead-end bungalow with a shadowy past despite one of them warning the rest about what lies ahead. The cameraman takes the atmosphere of gloom and doom seriously and pieces together a series of dimly lit sequences in an attempt to create an ambience in which the characters see things and hear voices that are supposed to jolt the living daylights out of them. More often not, all of this, instead of inducing fear, is hopelessly laughable.

A cloak of fatuity clings to the film as, even before the quintet can settle in, unexplained terrors begin strike the occupants - tough guy Nishok (Ramana), Nancy (Varsha Bollamma), Ashwath (Sanjiev), Preethi (Aishwarya Gowda) and the bumbling Karthik (Praveen Prem) - in the course of one night. The threat of death sends the fatuous five scurrying for cover.

The audience is supposed to presume that the mounting distress is going to play with their minds. But believe it or not, four of them find the spine to pull off a prank. The victim of the hoax, a guy who refuses to believe in the existence of ghosts, is reduced to a shivering wreck. Such attempts at humour are of a piece with the rest of the film. They fall flat because they are anything but convincing.

The question that is floating in the air is, is it some malefic paranormal force that is out to get them or are they being stalked by somebody from their past who might have a score to settle with them? That question is sought to be answered in the only way the film knows: with broad, facile strokes. So pedestrian is the writing, lighting and acting that nothing that unfolds on the screen comes anywhere near stoking our curiosity, let alone putting the fear of unknown in our hearts.

The job of the two actresses in the cast (Varsha Bollamma and Aishwarya Gowda), is limited to roll their wide-open eyes and stare intently at the camera to convey dread. Full marks for effort, zilch for outcome. The men are called upon to talk incessantly and have a go at each other when things don't go their way. Hectoring and hollering is the favoured mode of dialogue delivery here. If that isn't bad enough, the background score does more than its bit to keep hammering away at your ears until you are ready to go deaf.

Ramana, playing Nishok, says "Hey!" with more gusto than he can muster up when he pipes up: "I am not going to let anyone else die" or "I am going to turn into a ghost and kill you all!" This film would have been better off being a ghost - invisible.

In a cringeworthy scene about halfway into Mane No 13, two of the male characters engage in a supernatural seance and seek to summon a good spirit to get them out of trouble. The benign soul never materialises. As a result, the film has to make do with whatever is available. It fumbles its way through spectacularly uninspired twists that yield unseemly tangles rather than exciting tropes.

Mane No 13 is unabashedly derivative. That isn't the problem. That it chooses to make a spectacle of its penchant for puerility and snuff out any potential for intelligent and logical plot development is. The only shocks that the film delivers stem from its sheer lack of fresh ideas. It scrapes the bottom of the genre barrel. The returns are measly. Best avoided.