"I wish you all the very best my sweet Saina," wrote Saina Nehwal 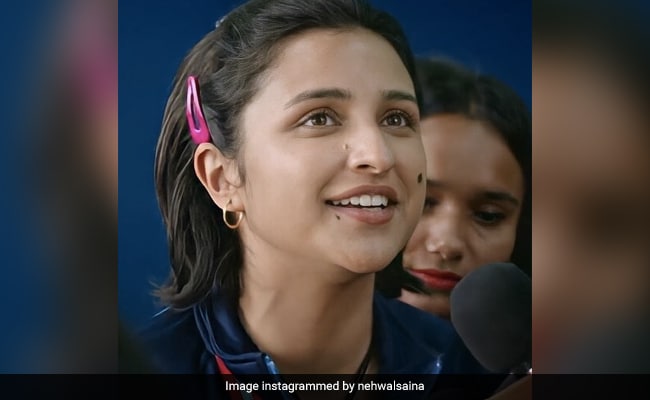 As Saina Nehwal's biopic titled Saina, is slated to hit the screens this month, the Badminton player shared new posters from the film on her social media profile on Thursday and she gave a shout out to Parineeti Chopra, who will be seen playing the lead role in her biopic. Sharing a poster, which shows Parineeti as a teen Saina, the Olympian wrote: "Wowww... Mini Saina. Love the look." Before that, she shared a poster featuring Parineeti and she wrote in her caption: "I wish you all the very best my sweet Saina. Great poster Parineeti Chopra."

One of the posters from the film has been trending big time and not for all the right reasons. The graphic poster displays movement of a hand which looks more like a tennis serve and not badminton. Unlike tennis, a badminton shuttle is not tossed high up in the air. The film's director Amol Gupte, on his unverified Facebook handle, described it as "high concept poster" and wrote: "Has to be unfortunately explained in detail to a quick reacting, impatient world... Not stopping to think before rubbishing anything! Socho!"

Too much speculation in the digital media about the poster... "looks like a tennis serve... Saina doing a Sania" etc...

Saina brings to screen the life of stellar Badminton player Saina Nehwal. The film, which is being backed by T-Series, is slated to release in cinemas on March 26. In 2019, Shraddha Kapoor was signed to play the lead role in the biopic. She had even started shooting for the film. However, the actress quit the project as she had several other projects in the line-up.