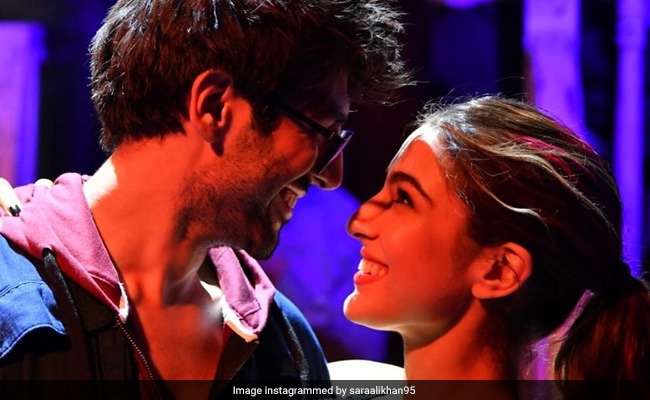 Time and tide wait for none. Sure. But neither does the tortuous, perplexing course of love in writer-director Imtiaz Ali's Love Aaj Kal, a Sufi-spirited inheritor of the world of his 2009 film of the same name. It places temporality at the centre of the universe as two courting couples - one in 1990 Udaipur, the other in 2020 Delhi - struggle to hold on to the opportunities that life offers them but make a hash of it.

Inevitably, Kabir and Rumi find honourable mention at a crucial juncture as the film dives into matters of the heart and the temptations of the body to come up with a staccato, somewhat sudsy exploration of relationships in two different and disparate eras.

Aaj (today) and kal (yesterday, which could also well be a precursor to tomorrow) are obviously two important signposts in the narrative. What's gone, what's on, and what's to come are interwoven into a freewheeling tapestry where the only inevitability is the impermanence of joy and pleasure. 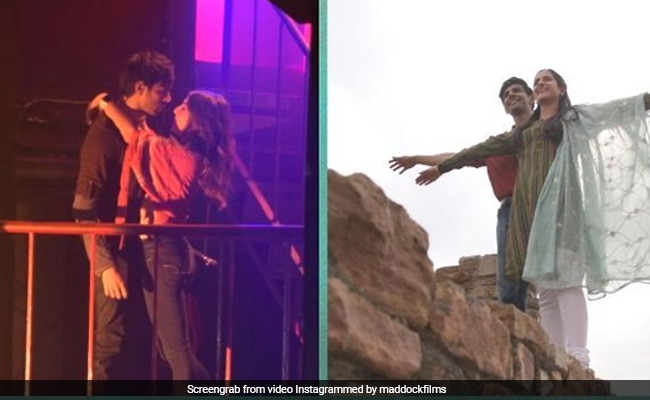 The future is obviously uncertain - no character in Love Aaj Kal pretends that it isn't - but the past lingers on well beyond its time. One of the key spaces in which the film unfolds is a cafe; and co-working pace. It is called Mazi, which is Urdu for 'past'. The restaurateur who owns the place hasn't emerged from the mistakes of a bygone phase. He hopes his back story, infused with the highs of youthful romance and the lows of missed chances, will be a tale strong enough to prevent history from repeating itself in the present day.

The story flits from one pair to the other to bring out facets of love that confound more than they comfort. Passion, commitment and companionship are constantly challenged by the complexity of the human mind and heart and the interplay of the past and present as the two pairs of lovers fluctuate between moments of certitude and bouts of confusion. 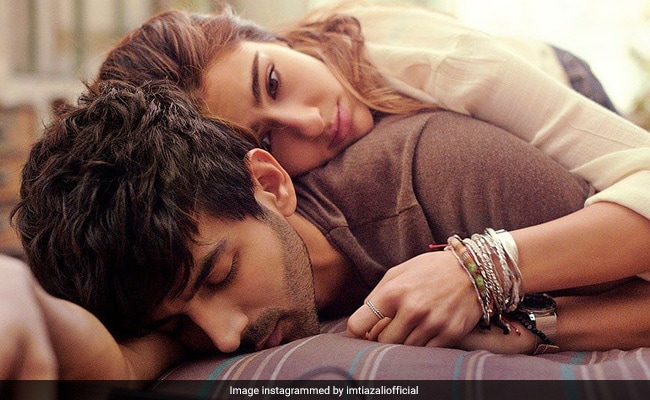 The structure of the film approximates the beats of the swaying souls of the characters. Therefore, in parts of Love Aaj Kal, the jumps between 1990 and 2020 and the vacillations caused by social pressures (in the earlier era) and personal ambitions (in the latter) appear a tad disorienting. But isn't that how life pans out for all those who breathe, love, exult, suffer, repent and seek redemption?

Thrown into a circuitous plot that moves in fits and starts - keeping pace with the deliberate, back-and-forth rhythm of the lovers' emotional upheavals - the four principal figures in the drama are marked by a streak of madness. And that is Imtiaz Ali's imprimatur on the romantic comedy-drama genre. He, pretty much like the people in his tale, revels in defying expectations.

Love Aaj Kal opens with two contrasting pre-credits scenes. In one, Leena (Bollywood debutante Arushi Sharma) berates Raghu (Kartik Aaryan), with all the sweetness at her command, for following her around the small town of Udaipur. In the next, Zoe (Sara Ali Khan) comes down like a ton of hot bricks on Veer (Kartik Aaryan again) for spurning her and yet not leaving her alone. 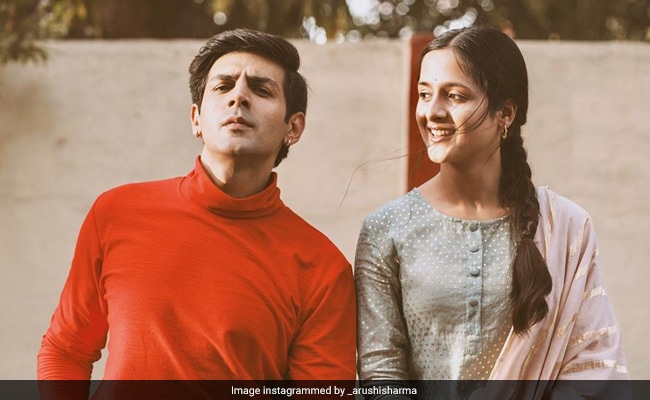 Love Aaj Kal Movie Review: Kartik and Arushi in a still from the film (Courtesy Instagram)

You may wonder if the film is condoning stalking. But that worry is dispelled as we are let into the world of Zoe, a girl determined to be a successful event manager - I have everything chalked out until I turn 55, she asserts. She is fine with putting everything else on hold until she achieves her goal. Zoe is sure she does not want her life to turn out the way it did for her mother (Simone Singh), who sacrificed her career to marry and raise children. Does that make Zoe a self-absorbed, selfish girl? Not a whit.

Zoe can be, as an employer says to her in reaction to what she does in a cheesy early scene (she undoes the top button of her blouse before stepping into the boardroom for an interview, an act caught on CCTV and hurled back at her), "shameless, cocky and generally inappropriate". Apologetic is the last thing this girl is ever likely to be although there are moments aplenty when she questions herself about her choices. 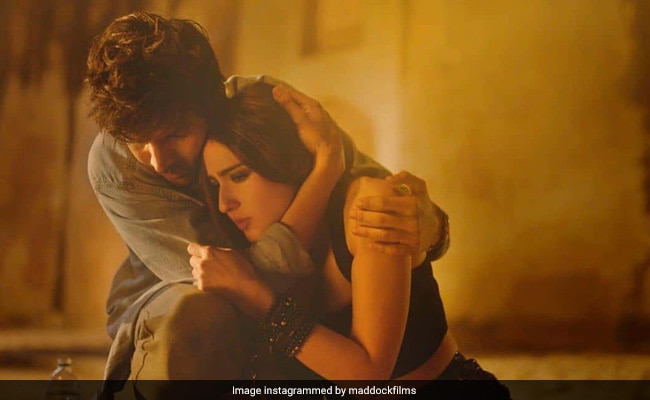 Even when Zoe is drunk and seemingly weak and unable to keep her emotions in check, she holds her ground and orders Veer to go his own way when the latter insists that he is seeking more from love than what is on the surface. In other words, he wants two plus two to be five. But no formula is good enough to be a solution for the imperfections and unpredictability of the pangs of love, which Leena and Raghu react to in one way, and Veer and Zoe in quite another.

The Udaipur lass is a mild-mannered, demure dance enthusiast for whom love does not mean being swept off her feet although she laps up Qayamat Se Qayamat Tak and her introduction scene is accompanied on the soundtrack by Maine Pyar Kiya's Dil deewana bin sajna ke mane na, yeh toh pagla hai. The boy who loves her is prone to getting caught during very secret rendezvous, leading to bedlam of the kind that justifies the "yeh toh pagla hai" bit.

Neither of the two men in the story - Raghu (who grows into a suave and sorted entrepreneur Raj, played by Randeep Hooda) and Veer are crippled by the way their inner conflicts impede their progress. They are a far cry from the toxically masculine lover boys we usually meet in Hindi cinema: they aren't the sort of men who strut around cockily, demanding more than what they deserve and fretting and fuming when they do not get it. 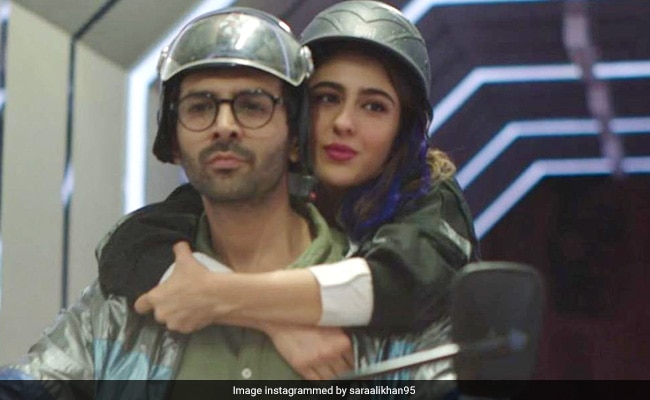 The performances, if not wholly consistent, are never short of intriguing. Sara Ali Khan is backed to the hilt by the screenplay and she gives the role of the girl who goes back and forth between endearing and mystifying in the flash of an eye all she has. She keeps you glued to the drama.

Arushi Sharma, on the other hand, has a role that is more reactive than anything else. She is called upon to merge into the edifice like filigree work in a larger design. She does.

In a double role, Kartik Aaryan is wildly erratic but impressively earnest, evolving from overly awkward to studiedly steady without ever being in complete control. Simone Singh, playing a cameo as Zoe's mother, is understated but luminous.

The strongest of all the actors on show in Love Aaj Kal is Randeep Hooda. He delivers a flawlessly measured interpretation of a been-there-done-that man who slips into the role of a sort of conscience-keeper for an always-in-a-rush generation.

Love Aaj Kal is an audacious, if flawed, ode to love as a quest for happiness and self-realization that often triggers conflicting emotions and unsettling impulses but never fails to enrich the soul. There is a touch of old-world magic to the film although the emphasis is squarely on a modern couple learning from a pair from a generation ago how to heal themselves. If you get it, you'll absolutely love Love Aaj Kal. If you don't, it might all feel like a meandering mess.

But no matter what, Love Aaj Kal is worth a watch because, like its protagonists, it isn't afraid of committing glorious mistakes.