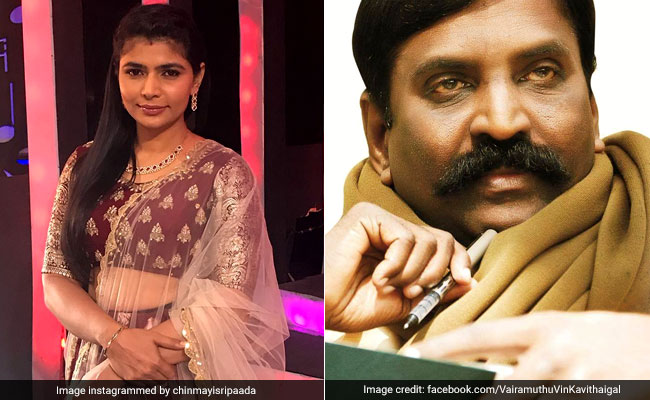 A day after playback singer Chinmayi Sripaada and several other women outed Vairamuthu as an alleged sexual predator, the Tamil poet-lyricist denied all the allegations made against him. "Spreading defamatory things against famous personalities is becoming a culture across the country. I have been continuously humiliated in recent times and this is also part of it. I will not bother about falsehood. Time will tell the truth," Vairamuthu wrote on Twitter. Chinmayi retweeted Vairamuthu's post and wrote "Liar". On Tuesday, Chinmayi Sripaada, in a series of tweets, accused Vairamuthu of harassing her when she was in Switzerland with him at a launch event. Chinmayi alleged that Vairamuthu wanted her to visit him at his hotel room after-hours and when she refused to give in to his wishes, she was sent back to India with her mother, who had also accompanied her to the destination.

The singer's mother in an interview to news agency ANI, said that "action" must be taken against the harassers. Speaking to ANI, Chinmayi Sripaada's mother said: "This has taken a very good momentum. It is all our duty to shake their head and tell them without mincing words. One look and put them in their position. We have to take action as individuals."

The National Award-winning singer Chinmayi Sripaada shared her story on social media and wrote: "Year 2005/2006 maybe... Veezhamattom, an album for Sri Lankan Tamizhs that I had sung in, as had Manikka Vinayagam sir... We went to Switzerland... We sang... We performed... Everyone left. Only my mother and I were asked to stay back. The organizer (I don't remember his name) asked me to visit Vairamuthu sir in a hotel in Lucerne. I asked why. He told me to cooperate. I refused. We demanded to be sent back to India. He said 'You won't have a career!' My mother and I both put our foot down... demanded an earlier flight to India and came back."

In her tweets, Chinmayi further wrote how years later, when she refused to perform at an event, the poet threatened her with harsh consequences. "Three, maybe four years ago, he had a book release function and asked me to sing Tamizh Thaai Vaazhthu. I said I would be unable to. He in turn responded 'I'll tell (a politician) you spoke ill of him on stage, yelled at me and kept the phone down. I bawled. My parents-in-law consoled me. Then had the courage to call his manager back and told him 'I'll go and tell the same politician you're lying because I have never given a political speech and he will trust me. This for refusing to sing. And you ask why victims don't name him?! To hell with those of you who do," Chinamayi tweeted.

After Chinmayi shared her #MeToo story on Twitter, actor Siddharth backed the singer's statement and wrote: "Multiple women are speaking out against Vairamuthu. Without judging anyone, they must be heard. When somebody of Chinmayi's stature who has so much to lose, stands by the accusers, that's huge!"

Actress Samantha also tweeted in support of Chinmayi and wrote: "Dear Rahul Ravindran and Chinmayi Sripaada, I know the both of you for ten years now . I don't know two more brutally honest people .It is this attribute of yours that I value most in our friendship . I love you with all my heart and what you say is the truth!!" Chinmayi Sripaada is married to actor-director Rahul Ravindran, who is actively supporting his wife in her battle.

Chinmayi has shared harrowing accounts of several survivors, who have been harassed by Vairamuthu. In an account shared by Chinmayi, a woman accused Vairamuthu of making a women's hostel, which he runs in Chennai, as his hunting ground:

Accusations against poet-lyricist Vairamuthu comes in the wake of #MeToo Movement, which exploded after Tanushree Dutta revived a decade old case of harassment against Nana Patekar. Several actresses and artistes have shared their #MeToo stories and have named prominent figures like Alok Nath, Kailash Kher and Rajat Kapoor as alleged sexual predators.