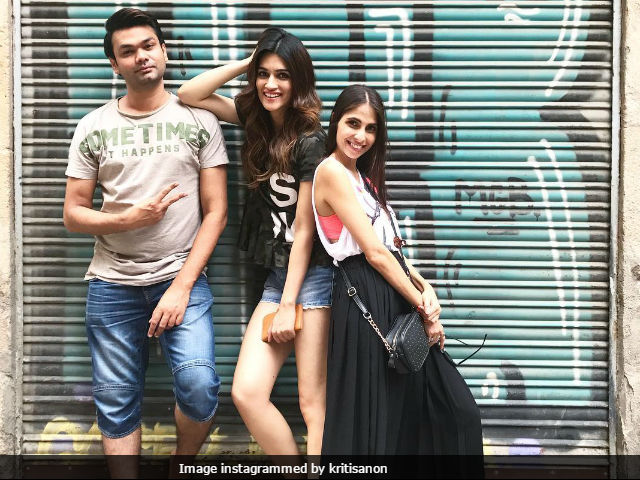 New Delhi: Actress Kriti Sanon, who is enjoying the success of her latest film Bareilly Ki Barfi is off on a much-needed break. The 27-year-old actress is currently vacation in Spain with friends and she has been delighting everyone by sharing wonderful pictures on her Instagram account. The photographs shared by Kriti Sanon are setting major vacation goals for us and they will definitely make you want to pack your bags and leave. In the pictures shared by Kriti, she can be dressed in denim shorts and a military t-shirt. She is happily posing for the cameras in the beautiful locales of Spain with her friends.

In love with this place! #traveldiaries #SpainLove

Kriti Sanon made her acting debut in 2014 with Sukumar's Telugu psychological thriller film 1: Nenokkadine. Sabbir Khan's Heropanti marked her Bollywood debut. She was seen romancing Tiger Shroff in the film. Kriti Sanon won the Filmfare Award for Best Female Debut for her performance in Heropanti.

Kriti Sanon's Bareilly Ki Barfi, co-starring Ayushmann Khurrana and Rajkummar Rao, released in theatres on August 18. The film has managed to collect over Rs. 24 crore at the box office so far.

Superstar Amitabh Bachchan, who recently watched Bareilly Ki Barfi, reviewed it as 'a delightful film' with 'competent and excellent performances' on Twitter. The 74-year-old actor also sent a bouquet of flowers to Kriti Sanon with a handwritten note, a picture of which was shared by her on Instagram.

This feels like a milestone in itself!!you've been such an inspiration..Thank you so so much Sir!!This really made my day!