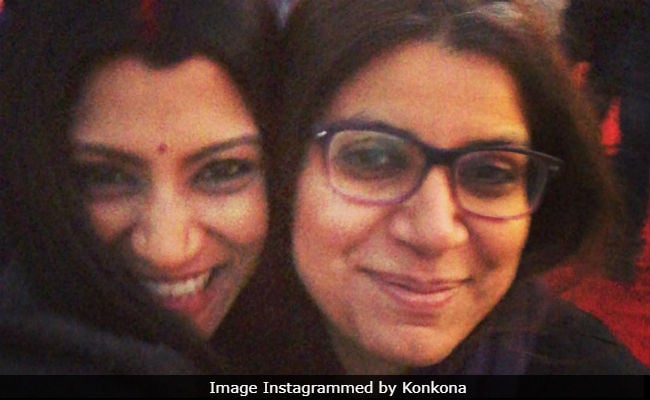 Konkona Sen Sharma recently wrapped the schedule of Dolly Kitty Aur Woh Chamakte Sitare and shared multiple pictures from the sets of the film on her Instagram profile. In one of the pictures, the actress could be seen posing along with her film's director Alankrita Shrivastava, while in the other photograph she could be seen posing along with the film's crew. Konkona accompanied the post along with a caption that read: "It's a wrap! Goodbye Dolly. Thanks for the memories. Love you Lanki!" Dolly Kitty Aur Woh Chamakte Sitare is Konkona and Alankrita's second collaborative project. The duo have earlier worked together in the 2017 film Lipstick Under My Burkha.

The 39-year-old actress frequently shared pictures from the sets of Dolly Kitty Aur Woh Chamakte Sitare. Konkon's co-star in the film Bhumi Pednekar and her film's producer Ekta Kapoor also made appearances on her Instagram profile.

Konkona announced her association with Dolly Kitty Aur Woh Chamakte Sitare by sharing the film's poster on her Instagram profile and she wrote: "Inside or Outside, we will do as we please!" She added the hashtag #JoinTheRebeLution."

Film's director Alankrita Shrivastava, in an earlier interview with news agency IANS, said: "I think it needs courage and a certain risk-taking ability to back films like the ones I want to make. And I'm so glad to have found a brave producer and presenter in Ekta. The future is female, and I think more women collaborating is the change that we need to see. Not just in India, but the world over."