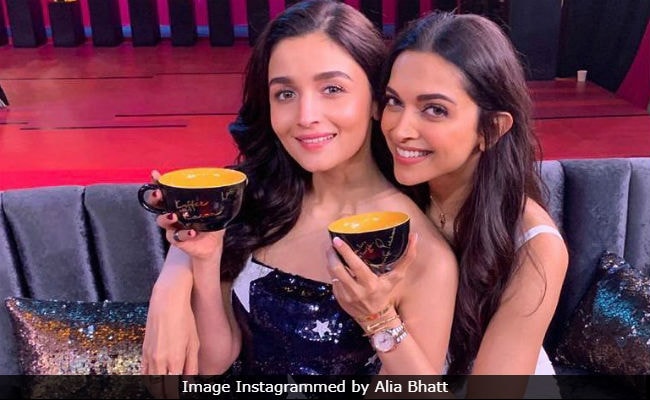 Alia Bhatt and Deepika Padukone on the sets of Koffee With Karan. (Image courtesy: aliaabhatt)

Karan Johar is back with the sixth season of his popular talk show Koffee With Karan and we could not have asked for a better start. Deepika Padukone and Alia Bhatt shared the couch in the first episode of the season and they totally nailed it. Alia and Deepika were prodded to talk about their personal relationships, dating rumours and of course, their marriage plans, which we sort of got an answer to. Alia and Deepika ruled every second of the show. Deepika made a series of revelations that included declaring that she will be the first one to get married.

The introduction could not have been better! Get ready for girl power! #KoffeeWithKaran#NowPlaying#KoffeeWithAlia#KoffeeWithDeepika@aliaa08@deepikapadukonepic.twitter.com/bFo5F2f84C

Did You Just Burp On National Television?

Alia Bhatt's burp moment was definitely one of the main highlights of the episode. Karan and Deepika couldn't help but laugh. Karan asked Alia, "Did you just burp on national television?

Are You Jealous, Karan?

This season, a fresh segment was added to the show, in which Karan documented a series of pictures and asked Deepika and Alia to comment on them. Karan showcased the pictures of Deepika , which had the comments of her boyfriend Ranveer Singh. When Karan Johar asked Deepika to explain the series of kiss emoticons on Ranveer's picture, Deepika responded, "Are you jealous, Karan?"

When Ayan Mukerji Was Asked To Leave

Karan then showed the first picture of Alia and Ranbir Kapoor (clicked at Sonam Kapoor and Anand Ahuja's reception), which started the rumour of the two dating. Alia explained that the reason she shared the picture with Ranbir was because she didn't want to share a solo picture. Deepika was quick to interrupt and said, "But you have a lot of solo pictures from that event." Karan Johar made an interesting revelation and added that Ayan Mukerji was asked to leave, so that Alia and Ranbir could click a picture together.

Another interesting facet of the show was when, Karan made Alia sing a song from Ranveer Singh's film and asked Deepika to sing Channa Mereya, which happens to be a song from Ranbir Kapoor's film Ae Dil Hai Mushkil. Alia disagreed to sing Nashe Si Chad Gayi and sang Laal Ishq instead.

Who sang it better? @deepikapadukone or @aliaa08#KoffeeWithKaran

"Who will get married first?" Karan asked the girls. We might know the answer to this question now (after Ranveer and Deepika shared a joint statement in which they revealed that their wedding will take place on November 14 and 15) but Deepika Padukone initially dodged the question and pointed towards Alia. However, she later admitted that she might get married first by saying "Fine." Interestingly, Alia said that Deepika and Ranveer's wedding might take place in November.

Needless to say, KJo wanted rapid and fiery answers, and he got some, most of them from Alia. Alia, effortlessly handled Karan's questions during the famous Rapid Fire Round and won like a boss. Another interesting segment, called 'Call A Lead Actress' was introduced in this season, as a part of which, both the guests had to call a Bollywood actress, while Alia Bhatt called Sonakshi Sinha, Deepika's only option was Alia as she didn't have the contact number of any actress. We are expecting actors  Akshay Kumar and Ranveer Singh in the second episode of Koffee With Karan 6.